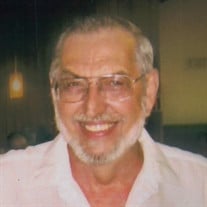 Earl R. Ward, 80, of Center Point, Iowa, died Friday, February 19, 2021, at Mercy Medical Center, Cedar Rapids, Iowa. Visitation: 4 – 7 p.m. on Friday, March 5, 2021, at Murdoch Funeral Home & Cremation Service in Center Point. Funeral Service: 10:30 a.m. on Saturday, March 6, 2021, at the funeral home. Pastor Jamie Smid from Lafayette Christian Church will officiate. There will be a private family burial following at the Center Point Cemetery, Center Point. All guests are respectfully requested to dress casually, wear a mask, and practice social distancing. Survivors include his wife, Shirley; children, Scott (Sherry) Ward, Eric Ward all of Center Point, Scott “Joe” (Laurie) Wilson of Muskegon, Michigan, and Robyn Ward of Center Point. He also left behind seven grandchildren; four great-grandchildren; sister, Shirley (James) Heath; and her sister-in-law, Janet Ward. He was preceded in death by his parents; daughter, Sandra (Russell) Young; granddaughter, Kyley Ward; and siblings, Keitha (Madison) Arnold, Merle Ward and Robert Ward. Earl was born on February 2, 1941, the son of Elmer and Grace (Moore) Ward of Center Point. He attended a one room rural schoolhouse until the sixth grade and graduated from Center Point High School in 1959. Earl served with the United States Air Force from 1959-1963 with an honorable discharge. He married Judith A. Duerkop in 1965, and they had three children together then later divorced. He married Shirley J. Wilson in 1981, gaining two step-children. After the USAF, he briefly worked at Nash Finch from 1963-1964, then worked at Collins Radio (Rockwell) from 1964, until retirement in 1986. He was the night shift union steward for the last twelve years of his career. The family would like to send out a special thank you to the Mercy Medical Center Covid/ICU units for their extraordinary care.

The family of Earl R. Ward created this Life Tributes page to make it easy to share your memories.

Send flowers to the Ward family.