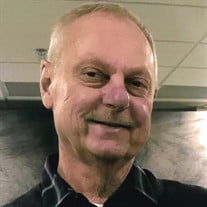 Edward “Ron” Ronald Holecek, 75, of Marion, Iowa, passed away of pancreatic cancer, on Thursday, February 24, 2022, at his home. Visitation will be held from 4 to 7 p.m. on Friday, March 4, 2022, at Murdoch Funeral Home & Cremation Service in Marion. Memorial service will be held 10 a.m. on Saturday, March 5, 2022, at the funeral home with Mike Morgan officiating. Full military honors will be provided by the Marion American Legion Post #298 and the United States Navy Honors Detail. In honor of Ron, the family requests guests wear blue jeans or camo because Ron preferred dressing casually. Ron was born on February 5, 1947, in Cedar Rapids, Iowa, the son of Edward and Vivian (Benesh) Holecek. He was a 1965 graduate of Marion High School and went on to attend Kirkwood Community College. Ron served honorably in the United States Navy from 1966 to 1970, during the Vietnam War. On January 7, 1989, Ron was united in marriage to Laura Ann Jellison in Marion, Iowa. Ron served as a police officer for the Marion Police Department for 30 years. He was a member of the Marion American Legion Post #298. He enjoyed feeding the squirrels, hunting, fishing, and spending time with friends, family and his Labrador Molly. Ron will be greatly missed by all who knew and loved him. Ron is survived and lovingly remembered by his wife of 33 years, Laura Holecek of Marion; two daughters, Carrie Holecek of Marion, and Amy Holecek (Mary McWilliams) of Cedar Rapids; step-son, Derrick (Kristy) Jellison of Cedar Rapids; step-daughter, Nichole (Langdon) Olson of Marion; two grandchildren, Addison and Oliver; and sister, Susan Miller of Marion. He was preceded in death by his parents, Edward and Vivian Holecek. In lieu of flowers, donations in Ron’s honor can be made to Lustgarden Foundation at www.lustgarten.org, Eastern Iowa Honor Flight at P.O. Box 10704, Cedar Rapids, Iowa, 52410 or UnityPoint Hospice of St. Luke’s Hospital at 290 Blairs Ferry Road NE #100, Cedar Rapids, Iowa 52402.

The family of Edward "Ron" Ronald Holecek created this Life Tributes page to make it easy to share your memories.

Send flowers to the Holecek family.