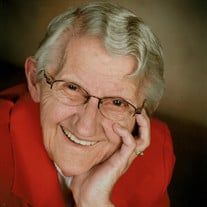 Eileen “Leenie” Thompson, 90, of Monticello, Iowa, passed from this world to the next on Thursday, June 16, 2022 at her home. A Funeral Mass will be held at 11:00 a.m. on Tuesday, June 28, 2022, at St. Stephen’s Catholic Church in Central City, Iowa. Reverend Nick March will officiate. Murdoch Funeral Home & Cremation Service in Central City is assisting the family. Eileen was born on July 4, 1931, in Luxemburg, Iowa, the daughter of Clement and Theresa (Hoffman) Friedman. She attended Lamont Schools in Lamont, Iowa and worked on the family farm. On January 18, 1956, Eileen married Robert Thompson at St. Mary’s Church in Lamont. After a few moves, Bob and Leenie made their home on the E and R Ranch, east of Central City, Iowa. The fourth of nine children, Leenie developed a work ethic stauncher then the languid Iowa humidity, which she brought forth to affront every life experience. From raising four kids, farming, gardening, canning and cleaning houses on the side, she ventured into milking six cows by hand, at a time in her life when most people thought of retiring. Leenie was known to break out in a polka dance when the mood was right and enjoyed a good hand of Euchre. Eileen will be remembered and cherished by her children, Larry (Belinda) Thompson of Turtle Point, Pennsylvania, Susan (Kevin) Steuhm of Idaho Falls, Idaho, Charles (Stephanie) Thompson of Kiowa, Colorado and Douglas (Peg Alatalo) Thompson of Central City, Iowa; nine grandchildren, Dallas of Turtle Point, Pennsylvania, Katie (Gabriele) of Migliana, Italy, Libbie (Brett) of Grapevine, Texas, Abbie of Iowa City, Sheela (Aaron) of Aurora, Colorado, Jake of Denver, Colorado, Josh of Kiowa, Colorado, Rachel (Ron) of Dubuque, Iowa, Jenny (Kyle) of Dubuque, Iowa; nine great-grandchildren; one sibling, Sr. Madonna Friedman, OSF of Waterloo, Iowa; and brothers-in-law, Merlin Goedken of Oelwein, Iowa and Jerry (Elaine) Thompson of Decorah, Iowa. Family who have paved the way to heaven are Eileen’s parents; her husband, Bob; and seven siblings, Cletus Friedman, Cyril Friedman, Lucille Goedken, Lavonne Breckenfelder, Robert Friedman, James Friedman and Mary Rasmussen. Memorials in Eileen’s memory may be made to St. Stephen’s Church or Above and Beyond Hospice in Monticello. After burial at Mt. Clark Cemetery in Central City, the family will gather at Horseshoe Falls Lodge in Pinicon Ridge Park for food and memories. They invite all to join.

The family of Eileen Margaret Thompson created this Life Tributes page to make it easy to share your memories.