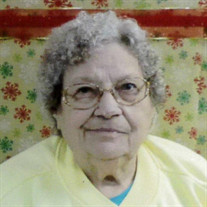 Ella “Joyce” Farrington, 96, of Prairieburg, Iowa, formerly of Anamosa, Iowa, passed away on Sunday, May 15, 2022, at Monticello Nursing Home in Monticello, Iowa. Visitation will be held from 5 to 7 p.m. on Wednesday, May 18, 2022, at Murdoch Funeral Home & Cremation Service in Central City, Iowa. Funeral service will be held at 10 a.m. on Thursday, May 19, 2022, at the funeral home with burial to follow at Mt. Clark Cemetery in Central City. Joyce was born on October 17, 1925, in Anamosa, the daughter of John and Marjorie (Taylor) Holmes. She was married to Warren Farrington for 53 years before he preceded her in death. Alongside her husband, she owned and operated Warren’s Tavern in Prairieburg for 33 years. Joyce later worked at the Abbe Center, retiring in 1994. She was a member of the Homemaker Club. Joyce and Warren owned a camper overlooking Guttenberg, Iowa, and spent the majority of their free time fishing on the Mississippi River with family and friends. Joyce will be greatly missed by all who knew and loved her. Joyce is survived and lovingly remembered by her two sons, Dennis (Linda) Farrington of Central City, and Jim (Patsy) Farrington of Prairieburg; one daughter, Susan (Craig) Harkness of Central City; many grandchildren and great-grandchildren; and one sister, Dorothy Lange of Olin, Iowa. She was preceded in death by her parents; Husband, Warren; daughter, Diana Fuller; and four sisters, Wilma Hurt, Mary Jones, Patty Sabotka, and Margie Holub Memorials in Joyce’s memory may be directed to St. Jude’s Children’s Hospital.

The family of E. Joyce Farrington created this Life Tributes page to make it easy to share your memories.

Send flowers to the Farrington family.