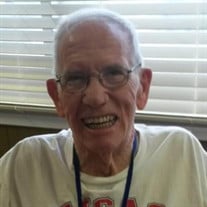 Elton Junior “Al” Remington, 87, of Marion, Iowa, passed away on Friday, February 11, 2022, at The Silver Oak Nursing and Rehabilitation Center in Marion. A visitation will be held from 12:30 to 1:30 p.m. on Tuesday, February 15, 2022, at Murdoch Funeral Home & Cremation Service in Marion. A memorial service will follow at 1:30 p.m. on Tuesday at the funeral home with Deacon Jeff Volker officiating. All guests are respectfully requested to wear a face mask and practice social distancing. Inurnment with military honors will take place at Cedar Memorial Park Cemetery in Cedar Rapids. A recording of the memorial service will be available the following day on the Murdoch Funeral Home website. Al was born on February 17, 1934, in Walker, Iowa, the son of Elton and Edna (Seeks) Remington. He attended Marion High School and went on to serve honorably in the United States Air Force from 1951 to 1955, during the Korean War. Al was united in marriage to Lorraine Kirby Jones on June 19, 1982, in Anamosa, Iowa. He worked for Link-Belt and Rockwell Collins in Cedar Rapids. Al was a member of the Marion American Legion Post #298. He enjoyed telling jokes, gardening, canning, and making sauerkraut. Al and Lorraine enjoyed traveling and dancing during retirement. He will be greatly missed by all who knew and loved him. Al is survived and lovingly remembered by his wife of 39 years, Lorraine Remington of Marion; five children, Mark Remington of Sun City, Arizona, Dennis Remington of Wells, Nevada, Bradley (Jennifer) Remington of Atlanta, Georgia, Fae Johnson of Whittier, Iowa, and Lonnie Jones of Marion; and eight grandchildren, Jeff (Stormy) Remington, Tonya Remington, Jordan Remington, Amber (Scott) Franzen, Ashley (Blake) Rodemeyer, Katie Jones, Adam Jones, and Holli Jones; seven great-grandchildren; one sister, Rita Urbanek of Marion; and several nieces and nephews. He was preceded in death by his parents, Elton and Edna Remington; two sons, Matthew Jay Remington and Charles Robert Jones; and one sister, Barbara Baker. In lieu of flowers, a memorial fund has been established.

The family of Elton Junior "Al" Remington created this Life Tributes page to make it easy to share your memories.

Send flowers to the Remington family.