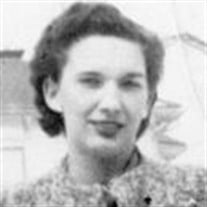 Erma Faye Halvorson, 94 of Cedar Rapids, Iowa, passed away on Saturday, April 2, 2022. A private family graveside service and inurnment will be held at Gods Acres Cemetery in Clermont, Iowa. Murdoch Funeral Home & Cremation Service of Marion, Iowa, is assisting the family. Born on November 1, 1927, in Cainsville, Missouri, to the late Frank S. and Eunice Landis Sparks, Erma was the last survivor of eight children. Her family was her life, and she was especially devoted to her husband, children, and grandchildren. Erma married John “Jack” Halvorson in 1951.Throughout their 35-year marriage, Erma and Jack lived in Pine Bluff, Arkansas, and Decorah, Iowa, before finally settling down on a farm in Clermont, Iowa, where they raised their family and lived until Jack’s death in 1986. Dearly beloved by her family, Erma is survived by her two daughters, Linda Maxwell of Tempe, Arizona, and Sharon (Moe) Frooshani of Laurel, Maryland; five grandchildren, John Frooshani, Jason (Kristin) Frooshani, Tammy Fox, Tina (David) Lee and Robin Fox; four great-grandchildren, two great- great grandchildren; two sisters-in-law, Eunice Halvorson of Marion, Iowa and Helen Broadus of El Paso, Texas; several nieces and nephews, and countless other family and friends. Erma will forever live in the hearts of those whom she loved and who loved her. She was preceded in death by her parents; husband, Jack; three brothers, Garland, Harlan, and Lawrence Sparks; four sisters, Zelma Harris, Wilma Sparks, Bessie Delk and Ina Beedle; and a grandson, Mark Frooshani. In the early 1950’s, Erma worked as a cashier at Blacks Tea Room in Waterloo, Iowa, a job that required her to wear white gloves, as was the fashion at the time for upscale restaurants. After the birth of her second child, Erma became a stay-at-home mom, a vocation she loved and cherished. She was extremely protective of her children and loved them unconditionally, giving always of her time and heart. If they needed her, she was there. In addition to caring for her family, Erma’s days on the farm were spent working in the garden, canning vegetables and fruits, helping neighbors hay, attending and volunteering at church, and at her children’s school activities. Erma was a long-time member of the American Legion Auxiliary, Sheehan Olson Post 375 in Clermont; the Order of the Eastern Star in Elgin; and the West Clermont Lutheran Church. She also was a regular attendee at national, state, and local Postmasters Meetings. When she couldn’t be with her family, Erma enjoyed spending time with her friends, whether in-person or on the phone, laughing and reminiscing about places she had traveled, the love of playing volleyball when she was younger, going to the casino, and dining out. We will always smile when we remember her April Fools’ jokes, “the Jell-O mold”, “the rock pile”, and her many expressions including: “I’m so full it’s coming out of my ears” and “be healthy, wealthy, and wise.” In lieu of flowers, donations may be made to the West Clermont Lutheran Church, 221 Larrabee Street, P.O. Box 327 in Clermont, Iowa, in Erma’s name.

The family of Erma Faye Halvorson created this Life Tributes page to make it easy to share your memories.

Erma Faye Halvorson, 94 of Cedar Rapids, Iowa, passed away on...

Send flowers to the Halvorson family.