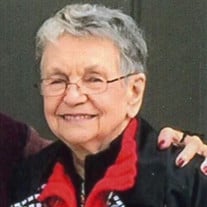 Erma Jean Van Alst, 84, of Central City, Iowa, passed away on Sunday, September 12, 2021, at the Dennis & Donna Oldorf Hospice House of Mercy in Hiawatha, Iowa. A funeral service will be held at 10:30 a.m. on Wednesday, September 15, 2021, at CRFirst Assembly Church, located at 3233 Blairs Ferry Road NE in Cedar Rapids, Iowa, with Pastor Rick Gail officiating. The family will greet friends and family from 9 a.m. until the service time on Wednesday at the church. Please enter through door #3 or door #4 at the church for the visitation and the service. In agreement with her wishes, cremation will take place after the service. A private family committal service will take place at a later date. Murdoch Funeral Home & Cremation Service in Marion, Iowa, is assisting the family. Erma Jean was born on January 3, 1937, in Central City, one of three children to Leonard and Fern Iola (Madery) Meakins. She was a 1955 graduate of Central City High School. On January 18, 1992, Erma Jean was united in marriage to Alva Eugene Van Alst. She was a switch board telephone operator for the Central City Telephone Company and also worked for the Sutton family at the Linn County Newsletter. Erma Jean was employed for several years as a secretary for the Linn County Conservation Parks & Recreation Department. She was a member of CRFirst Assembly Church. Erma Jean loved reading the Bible and sharing scriptures with family and friends. She will be greatly missed by all who knew and loved her. Erma Jean is survived and lovingly remembered by her husband of 29 years, Eugene “Gene” Van Alst of Central City; daughter, Jean Kay (Shae Jensma) Port of Parker, Colorado; stepson, Marcus A. (Celia) Van Alst of Central City; son-in-law, Greg Klocke of Fountain Hills, Arizona; two grandchildren, Ashley Port of Aurora, Colorado, and A.J. (Kylie) Wolfe of Scottsdale, Arizona; three step-grandsons, Ashton Van Alst, Austin Van Alst, and Braxton Van Alst all of Central City; one great-granddaughter, Ava Rae Matheny of Aurora, Colorado; sister, Maxine Jamison of Ridgeway, South Carolina; and brother, Darwin Meakins of Germany. She was preceded in death by her parents; son, Ken Allen Nielsen; and daughter, Carol Marie Klocke. In lieu of flowers, memorials in Erma Jean’s memory may be made to CRFirst Assembly Church or the family to be designated at a later date.

The family of Erma Jean Van Alst created this Life Tributes page to make it easy to share your memories.