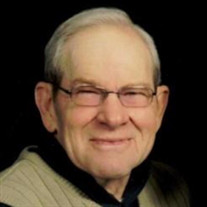 Eugene "Gene" A. Schmidt, 79, passed away March 9, 2022, surrounded by his family in the St. Luke's Hospice Care Center after an extended illness from respiratory problems. A visitation will be held from 9 – 11 a.m. on Saturday, March 19, 2022, at Murdoch-Linwood Funeral Home & Cremation Service in Cedar Rapids. A funeral service will follow at 11 a.m. on Saturday at the funeral home. A livestream of the funeral service may be accessed on the funeral home website tribute page for Gene, under “photos and videos,” starting at 11 a.m. on Saturday, March 19. Gene was born breech and motionless on the kitchen table of the farm home of Arnold and Mary Schmidt of Williamsburg, Iowa, on April 23, 1942. With no sign of life, Gene was placed aside so the midwife could tend to his mother. His father noticed movement from Gene and he was then revived and went on to enjoy life on the farm. His hobby was to tear apart and repair non-working tractors and equipment which led to his lifetime career. After completing the first six years in a country school, he attended high school at Williamsburg Community School graduating with the Class of 1960. Upon returning home from Basic Training with the 109th Medical Battalion Iowa National Guard, Gene started his career in auto repair at several Ford Dealerships as a mechanic, service advisor, and service manager in Williamsburg, Iowa City, and Cedar Rapids. In 1970 he married the love of his life, Karen (Collingwood), and after several years working for Clayt's Auto, he fulfilled his dream of owning his own auto repair business. He and Karen worked together at Gene's Auto Clinic in downtown Cedar Rapids for 20 years before deciding to retire. It wasn't long before he decided to get back to work again at an auto parts store. His most recent employment was at Vernon Village True Value doing small engine repair and also doing window and screen repair. He always liked to stay busy and worked there from 2003 until 2019 when his health declined. Gene received the sacraments at St. Michael's Church in Holbrook, Iowa, and later became a member of All Saints Catholic Church of Cedar Rapids. For over 50 years he has been a proud member of the Knights of Columbus Council 5390 Degree Team where he was a former Grand Knight. He truly enjoyed working with the Knights of Columbus and the satisfaction of doing good for others. Gene and Karen were married in 1970 and have truly been blessed with a close-knit family. Gene is survived by his wife Karen; Son Kevin (Julie) of North Liberty and their two children Dylan and Alaina; Son Rodney (friend Amy) and former wife Jane Nicholas and his three children Isabel, Joseph, and Curran of Cedar Rapids; siblings Earl Schmidt, Don (Rita) Schmidt, Renee Phillips, Randy (Becky) Schmidt, and numerous nieces and nephews. He was preceded in death by his parents, brother-in-law Bob Phillips, and sister-in-law Fran Schmidt. The family wishes to thank St Luke's Hospital and the St Luke's Hospice Care Center for the very comforting and wonderful care Gene and his family received during his final journey. A memorial fund has been established.

Eugene "Gene" A. Schmidt, 79, passed away March 9, 2022, surrounded by his family in the St. Luke's Hospice Care Center after an extended illness from respiratory problems. A visitation will be held from 9 &#8211; 11 a.m. on Saturday, March... View Obituary & Service Information

The family of Eugene 'Gene' A. Schmidt created this Life Tributes page to make it easy to share your memories.

Send flowers to the Schmidt family.