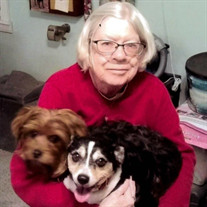 Eve A. Hodge, 80, of Marion, Iowa, passed away on Saturday, June 26, 2021, at St. Luke’s Hospital in Cedar Rapids, Iowa. Funeral services will be held at 4 p.m., on Saturday, July 10, 2021, at Murdoch Funeral Home & Cremation Service in Marion, where the family will greet friends and family from 2 to 4 p.m. prior to the service time on Saturday. In agreement with her wishes, cremation will follow services. A private committal service will take place at a later date. Eve was born on January 31, 1941, in Paxton, Illinois, the daughter of William and Ruby (Troyer) Lachenmyer. She was a 1959 graduate of Gibson City High School, where she enjoyed archery, skating, and was a member of the marching band and FHA. Eve received a certificate from The Electronic Radio Television Institute in Omaha, Nebraska. On August 29, 1965, she was united in marriage to Ralph F. Hodge, in Normal, Illinois. She went on to work for nearly 20 years at Steel Products in Cedar Rapids and Marion. Eve enjoyed knitting, water skiing and was an avid reader. She loved being with her family and will be greatly missed by all who knew and loved her. Eve is survived and lovingly remembered by her three sons, Tony (Shawn) Hodge of Clarkville, Tennessee, Rusty (Robin) Hodge of Marion, and Mike Hodge of Denver, Colorado; four grandchildren, Cody, Joseph, Kylie, and Tess; two great-grandchildren, Dezzy and Eva; sister, Billie Jo (Dave) Donovan of Clinton, Iowa; niece, Kelly Jo (Joe) Hoerschlemann; nephew, Chris (JoEllen) Donovan; and her dog, Josie. She was preceded in death by her parents; and husband, Ralph Hodge.

The family of Eve A. Hodge created this Life Tributes page to make it easy to share your memories.

Send flowers to the Hodge family.