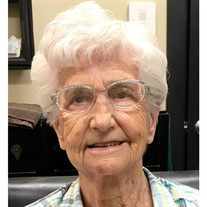 After a long life well-lived, Evelyn May Dunek, 97, of Cedar Rapids, died Friday, November 13, 2020. Surviving Evelyn are her three children: Dan (Lois) Dunek of Brownsville, Texas; Deb Dunek (Robert White) of Cedar Rapids; and Ron (Terrie) Dunek of Ankeny; five grandchildren: Joset Etzel (John Smith) of St. Louis, Missouri; Kelly (Joel) Douglas of Cheyenne, Wyoming; Ken (Heidi) Dunek of Houston, Texas; Carrie (Nick) Borchert of North Liberty; and Alex (Jasmin) Dunek of West Des Moines; and six great-grandchildren: Sofia Dunek, Louis and Anna Douglas, Evelyn and Edwin Borchert and Harper Dunek. She is also survived by her sister Emma Jane Benware of Scottsdale, Arizona and many nieces and nephews. Evelyn was born April 14, 1923, at home in Cedar Rapids, the daughter of Edward and Emma Zamastil. Growing up during the Depression, she helped her family through desperate times when just getting food on the table was an accomplishment. She graduated from Roosevelt High School, then World War II started. She built radios at Collins Radio, becoming one of the millions of Rosie the Riveters working to save the world from fascism. She met Louis Dunek at Danceland Ballroom after the war, and they were married March 29, 1947. As their family grew, Evelyn learned to drive a car so she could get to work at Armstrong’s Department Store. Family was the most important thing to her, and she made sure her family had what was needed in the uncertain economic times of the 50s and early 60s. Evelyn’s positive outlook and cheerful spirit kept her family close to her. She loved teaching her grandkids how to play cards—beating them often in Rummy. She also loved listening to big band and polka music, coloring and watching sports. Her father instilled in her a love of sports by taking her to the Hawkeye games on the “inurban” train to Iowa City. She remained a loyal Hawkeye and Cubs fan throughout her life. She was preceded in death by her parents and four brothers. After almost 40 years of happy marriage, Louis died in 1987. Evelyn was a true American hero and her family will miss her more than can be described. Private services are being arranged with Murdoch-Linwood Funeral Home & Cremation Service in Cedar Rapids. Memorials may be made to Salem United Methodist Church.

The family of Evelyn May Dunek created this Life Tributes page to make it easy to share your memories.

Send flowers to the Dunek family.