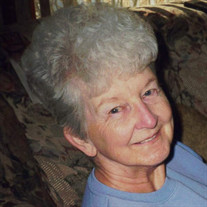 Evelyn Rose Tlusty, 97, of Cedar Rapids, Iowa, died Tuesday, July 6, 2021, at the Dennis & Donna Oldorf Hospice House of Mercy, Hiawatha, Iowa. A celebration of life will be held at a later date. Interment will be held at Czech National, Cedar Rapids. Murdoch-Linwood Funeral Home & Cremation Service, Cedar Rapids, assisted the family. Evelyn was born March 21, 1924, in Cedar Rapids, the daughter of Charles and Libbie (Zeman) Vomacka. She graduated from Wilson High School. She worked at Sunbeam Bakery and Collins Radio while the men were serving in the war. Evelyn was united in marriage to Woody Swenka and together they had one child, David. They lived on a farm in Riverside, Iowa until Woody passed away. She returned to Cedar Rapids and married her childhood playmate, Wilfred Tlusty on May 31, 1952, (she remembered him, but he didn’t remember her!) and together they had three children, Tony, Sheryl, and Ted. Every summer she and Wilfred would pack up the VW bus and the family headed out to see the USA! The family spent many wonderful hours at the card table playing Skip-Bo but Evelyn’s favorite activity was Bingo. She just recently acquired her kitty companion, Nadia. Evelyn will be dearly missed by everyone that loved her. Survivors include her children, Sheryl (Dan) Kobusch of Cedar Rapids, Tony Tlusty of Cedar Rapids, and David (Joanne) Swenka of Marion; grandchildren, Dillon (Suzie) Kobusch, Angela Kobusch, Scott Swenka, Robin Swenka, Brad Tlusty, Greg (Linsay) Tlusty, and Ed Tlusty; great-grandchildren, Alex Saylor, Ethan Kobusch, Truett, Avery, Ashton, Ainsley and Kayla Tlusty, and Ava Winger. She was preceded in death by her husband, Wilfred in 2008; son, Ted Tlusty in 2007, and first husband, Woody Swenka. Memorials may be directed to the Dennis & Donna Oldorf Hospice House of Mercy or Czech National Cemetery.

The family of Evelyn Rose Tlusty created this Life Tributes page to make it easy to share your memories.

Send flowers to the Tlusty family.