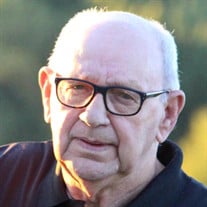 Frank J. Michael, 81, of Central City, Iowa, passed away on September 11, 2021, at St. Luke’s Hospital. A Celebration of Life will be held at 3 p.m. on September 17, 2021, at Murdoch Funeral Home & Cremation service in Central City, with a visitation one hour prior. Frank was born on February 18, 1940, in Cedar Rapids, Iowa, the son of Frank and Margaret (Williams) Michael. He attended McKinley High School in Cedar Rapids and went on to become a mechanic and truck driver for former James W. Bell Co. of Cedar Rapids, he then went on to work for Bowker Mechanical in Cedar Rapids retiring in 2001. After retirement he worked for Michael Excavation in Coggon. Frank enjoyed spending time with his grandchildren and tinkering and collecting scrap metal. Frank will be greatly missed by all who knew and loved him. After death he gave the gift of sight by being an eye donor. Frank is survived and lovingly remembered by his children, Laurie (Uwe) Vangsness of Cedar Rapids, and John (Christie) Michael of Marion; nine grandchildren, Jennifer (Steven) Brink, Brian (Kasandra) Coffin, Christopher (Alyssa) Michael, Taylor (Riley) Michael, Justin Moore, Jessica Michael, Frankie Moore, Kylie Tanner and Dakota Heughins; 10 great-grandchildren; three sisters, Barbara Olmstead, Carmelita (Art) Adams, and Jodi (Cecil) Mullins all of Loveland, Colorado. He was preceded in death by his parents and daughter, Lisa Michael. Memorials in Frank memory may be directed to Central City Food Bank. The Michael family would like to invite all family and friends to the American Legion in Central City immediately following the service for food, drinks and conversation. Please share a memory of Frank at www.murdochfuneralhome.com under obituaries.

The family of Frank John Michael created this Life Tributes page to make it easy to share your memories.

Send flowers to the Michael family.