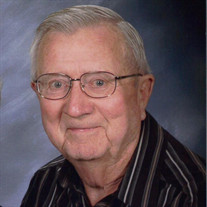 Frank Gary O’Connell, 87, of Marion, Iowa, passed away on Friday, June 11, 2021, at his home with his family by his side. A Parish Vigil will be held at 4:00 p.m. on Monday, June 14, 2021, at Murdoch Funeral Home & Cremation Service in Marion, followed by a visitation from 4:30 to 7:00 p.m. at the funeral home. A Mass of Christian Burial will be held at 10:30 a.m. on Tuesday, June 15, 2021, at St. Joseph Catholic Church in Marion conducted by Reverend David O’Connor, with visitation one hour prior. Burial will follow at 3:00 p.m. at St. Patrick’s Little Creek Cemetery in rural North English. Frank was born on July 26, 1933, in Van Vleck, Texas, the son of Edward and Myra Ethel (Bickham) O’Connell. He served honorably in the United States Army and attended Texas A&M University. In 1959, Frank was united in marriage to Henrietta “Henri” Gent. They lived in Houston, Texas before moving to Marion, Iowa in 1967. He worked the majority of his career at Rockwell Collins before retiring in 1993. Since then they have wintered in Texas and spent their summers in Iowa. Frank was an avid sports fan; he especially liked watching Texas A&M, Iowa State, and Linn-Mar sports. He enjoyed golfing and hosting country western festivals. Frank was a member of St. Joseph Catholic Church in Marion, the Lions Club, and the Linn-Mar School Board. He had lots of friends and will be greatly missed by all who knew and loved him. Frank is survived and lovingly remembered by his wife of 62 years, Henri O’Connell of Marion; four children, Teresa (Bryan) Dodd of Phoenix, Arizona, Lisa (Patrick) Kirchner of Urbandale, Iowa, Joe (Norma) O’Connell of Marion, and John (Jodie) O’Connell of Solon, Iowa; grandchildren, Leah Dodd of Des Moines, Iowa, Ian Dodd of Phoenix, Samuel Kirchner of Denver, Colorado, Madeline Kirchner of Des Moines, and Max O’Connell of Shueyville, Iowa; and two step-grandchildren, Andrew Mullinnix of Omaha, Nebraska and Madie Mullinnix of Iowa City, Iowa. He was preceded in death by his parents, Ed and Ethel O’Connell; and two brothers, Kenneth and Herbert O’Connell. In lieu of flowers, memorials in Frank’s memory may be made to St. Joseph Catholic Church in Marion, Hospice of Mercy in Cedar Rapids, or St. Patrick Little Creek Cemetery in rural North English.

The family of Frank Gary O'Connell created this Life Tributes page to make it easy to share your memories.

Send flowers to the O'Connell family.