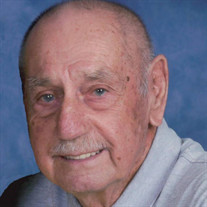 Frank J. Smith, 94, Vinton, Iowa passed away peacefully at home after a short illness on Monday, November 2, 2020. Visitation: 4 – 6 p.m. Monday, November 9, 2020, at Murdoch-Linwood Funeral Home & Cremation Service, Cedar Rapids, Iowa. Funeral Services: 10:30 a.m. Tuesday, November 10, 2020, at St. Mary’s Catholic Church, Vinton. Burial: St. Joseph Cemetery, Cedar Rapids. All guests are respectfully requested to wear a mask and practice social distancing. Frank was born March 14, 1926, in Cedar Rapids, the son of Frank and Dora Smith. He graduated from Palo School in the top 8 of his class. Frank proudly served in the Marines during WWII in the Pacific where he received the Purple Heart medal. After being honorably discharged, he married Jennie Sackett on January 15, 1955, at St. Patrick’s Catholic Church. They lived in Palo, Iowa and raised seven children. Frank held many jobs in his life from selling magazines across the country, taxi driver in Cedar Rapids, hauled heavy equipment for Van Buskirk and settled down working at Crawford Quarry for 33 years. He enjoyed catching as many catfish as he could (made him feel like a kid again), deer hunting, camping with family and friends, and playing cards with friends. Frank had a meticulously weed-free large garden which provided fruits and vegetables for his family and friends through the winters. He also enjoyed his beers and cigars as well as making raspberry brandy. Upon retiring, he and Jennie wintered at River Ranch Resort in Rio Hondo, Texas for 25 years, always returning to Palo in the spring. Frank was a member of the American Legion for 67 years. He was able to participate in the Honor Flight to Washington DC in 2011, with his son, Jerry, by his side. Survivors include his wife of 65 years, Jennie; his children, Frank “Joe” Smith Jr. of Palo, Cathy (Jim) Wyckoff of Fairfield, Lynne Smith (Joe Ernster) of Cedar Rapids, Jerry Smith of Vinton, Susan (Chris) Lynch of Roswell, Georgia, Sherri (Wes) Shropshire of Bluffton, South Carolina and Carol (Andrew) Elwick of Vinton; sister, Esther Little of Marshalltown; brothers, Ronald (Maxine) Smith of Cedar Rapids and Larry (Marcia) Smith of Troy Mills; 19 grandchildren; and 11 great-grandchildren. Frank was preceded by his son Jeffrey; sister, Janice Sanders; parents, Frank and Dora Smith; in-laws, Roy and Ina Sackett; brother-in-law, Martin Sackett; sister-in-law, Carol Poyner. The family would like to extend a very grateful thank you to René, Lindsey, Joe and Lisa at Mercy Hospice for walking with our family through this stage of life. In lieu of flowers or plants, the family would appreciate donations directed to Hospice of Mercy, 315 18th Avenue, Hiawatha, Iowa 52233, in Frank’s memory.

The family of Frank J. Smith created this Life Tributes page to make it easy to share your memories.