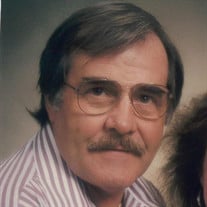 Fredrick C. Darrah, 79, of Palo, Iowa, passed away on Monday, April 26, 2021, at his home in Palo. Family will greet friends from 11 a.m. to 1 p.m. on Thursday, April 29, 2021, at Murdoch Funeral Home & Cremation Service in Marion, Iowa. A funeral service will take place at 1 p.m. at the funeral home on Thursday, conducted by Pastor Darran Whiting and Pastor Ray Peters. Burial will follow at Palo Cemetery in Palo. All guests are respectfully requested to wear a face mask and practice social distancing. Fredrick was born on April 27, 1941, in Burlington, Iowa, the son of William Wayne and Elinor Jane (Smyth) Darrah. He founded Darrah’s Towing in 1981. Fredrick retired in 2003 and transitioned ownership to his daughter Carmela Chiafos. He proudly stayed on as founder and consultant until his death. Fredrick raced dirt track stock cars in the 80’s and won one track championship. He was a lifetime NASCAR fan and enjoyed hunting and fishing. Fredrick was united in marriage to Ramona Peters on August 28, 1992, in Cedar Rapids, Iowa. They spent almost 29 years working together at Darrah’s Towing. Fred and Ramona fished and hunted together, taking multiple trips to Canada. They especially enjoyed planning and tending to their large garden. Fredrick took a lot of pride in the fruits and vegetables in their garden. He will be greatly missed by all who knew and loved him. Fredrick is survived and lovingly remembered by his wife of 28 years, Ramona Darrah of Palo; five children, Carmela Chiafos of Marion, Colleen (Dale) Probasco of Tama, Iowa, Barbara (Rick) Kregel of Palo, Brian (Marty) Stoll of Cedar Rapids, and Greg (Melonie) Stoll of Cedar Rapids; ten grandchildren, Jessica, Lisa, Jordan, Kolin, Robert, Rachel, Rose, Demetra, Irish, and Lily; and five great-grandchildren. He was preceded in death by his parents; son, James Dean; and son-in-law, Robert Chiafos. Memorials in Fredrick’s memory may be made to Shriners Hospitals for Children at 2900 Rocky Point Drive in Tampa, Florida, 33607.

The family of Fredrick C. Darrah created this Life Tributes page to make it easy to share your memories.

Send flowers to the Darrah family.