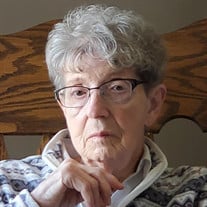 Garnet Eileen Hoffner, 81, of Cedar Rapids, Iowa, passed away on Monday, April 4, 2022, at her home, surrounded by her family. The family will greet family and friends from 2:00 to 4:00 p.m. on Sunday, April 10, 2022, at Murdoch Funeral Home & Cremation Service in Marion, Iowa. Funeral Services will be held at 10:30 a.m. on Monday, April 11, 2022, at the funeral home. Garnet’s casket will be closed at all times. Burial will follow at Cedar Memorial Park Cemetery in Cedar Rapids. Garnet was born on July 30, 1940, in Iowa City, Iowa, the daughter of Hugh and Opal (Pilcher) Sample. She graduated from Marion High School. On October 1, 1960, Garnet was united in marriage to James Edward Hoffner in Cedar Rapids. She worked for First National Bank in Cedar Rapids, Rockwell Collins, and Iowa Periodicals, retiring in 1998. Garnet enjoyed square dancing and was a member of the Rapid 8’s Square Dance Club. She also enjoyed round dancing, clogging, sewing, doing yard work, and going to lunch with her girlfriends. Garnet will be greatly missed by all who loved her. Garnet is survived and lovingly remembered by her daughter, Jodi Schultz (Dave Walton) of Palo, Iowa; and two grandchildren, Amanda Schultz and Rachel Schultz. She was preceded in death by her parents; and husband, James Hoffner. Memorials in Garnet’s memory may be directed to either Camp Courageous or Parkinson’s Association.

The family of Garnet Eileen Hoffner created this Life Tributes page to make it easy to share your memories.

Send flowers to the Hoffner family.