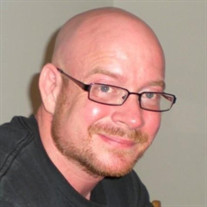 Garth Wyatt Reiman, 47, of Cedar Rapids, Iowa, left this earth on Saturday, April 9, 2022. A memorial service will be held at 10:30 a.m. on Saturday, April 23, 2022, at Murdoch-Linwood Funeral Home & Cremation Service in Cedar Rapids, with a visitation one hour prior. Burial will take place at a later date at Cedar Memorial Park Cemetery in Cedar Rapids. Garth was born to Greg and Deb (Schafer) Reiman on February 23, 1975, in Cedar Rapids. He was an adorable, precious child with natural gifts and talents that served him well throughout his life. A 1993 graduate of Mount Vernon High School, Garth excelled in football, wrestling, and challenging authority. After graduating from MVHS, he attended Kirkwood Community College where he obtained a degree in Criminal Justice. Garth’s career path, however, led him to a different form of service to others: working in supervisory and management capacities both at APAC and Transamerica, where he was a devoted employee for over 20 years. His favorite part of the job was identifying talent and mentoring them to achieve their potential. In his spare time, he had many passions. Garth was a lifelong Miami Dolphins fan and avidly followed Hawkeye football and wrestling. He was dedicated to strength training, which led to an interest in MMA and UFC. Garth closely followed Martin Truax, Jr. in NASCAR. He enjoyed biking and learned to love camping. Garth was in his glory on vacations because he loved doing new and adventurous things. Garth would tell you without hesitation that the best thing that ever happened to him was the birth of his daughter, Kali. His world revolved around her, and she has delightful memories of their time together. He sobbed when she left home for college but was incredibly proud of her accomplishments and chosen career. His love for her would never be a question. Garth was also a loving cat-dad throughout the years to Bear, Chloe, and Bella. Left to cherish the memory of Garth Reiman are his daughter, Kali Reiman (Austin Johrendt); his mother, Debra Reiman; his brother, Kirk Reiman; and numerous aunts, uncles, and cousins scattered around the country. He was preceded in death by his father, Greg Reiman; paternal grandparents, Stanley and Betty Reiman; and maternal grandparents, Virgil and Alice Schafer.

The family of Garth Wyatt Reiman created this Life Tributes page to make it easy to share your memories.

Send flowers to the Reiman family.