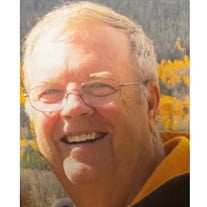 Gary L. Wilhelm, 71, of Cedar Rapids, Iowa, died Wednesday, September 29, 2021, at the Dennis & Donna Oldorf Hospice House of Mercy in Hiawatha, Iowa. A visitation will be held from 4:30 – 6:30 p.m. on Monday, October 4, 2021, at Murdoch-Linwood Funeral Home & Cremation Service in Cedar Rapids. A funeral Mass will take place at 10:30 a.m. on Tuesday, October 5, 2021, at St. Ludmila Catholic Church in Cedar Rapids, with a visitation at the church one hour prior. Burial will follow at Linwood Cemetery in Cedar Rapids. Gary was born August 11, 1950, in Cedar Rapids, the son of Faye and Eva (Norman) Wilhelm. He attended Jefferson High School and went on to graduate from Coe College. Gary served in the Army Reserves during the Vietnam era. He was united in marriage to Paula Abbott on September 4, 1971, at St. Patrick Catholic Church in Cedar Rapids. Gary loved attending his children and grandchildren’s events. He enjoyed golfing and playing cards with his family. Gary and Paula shared a love of cooking and traveling together. He was an avid Bears, Cubs, and Hawkeye fan. Above all else, he was a dedicated family man and a great listener; you could always count on Gary for anything. He never let his family forget a group hug. Survivors include his wife of 50 years, Paula Wilhelm; daughters, Kelly (Randy) Kremer and Amy (Brent) Paulson; grandchildren, Noah Kremer, Claire Prokop, Nicholas Kremer, Olivia Kremer, and Blake Paulson; siblings, Monica Jansen, Dennis (Shirley) Wilhelm, Steven (Carol) Wilhelm, and Marsha (Howard) Worm; and sister-in-law, Jackie Wilhelm. He was preceded in death by his parents, Faye and Eva Wilhelm; brother, Gordon Wilhelm; and brother-in-law, Leonard Jansen. Memorials may be directed to Paula Wilhelm.

The family of Gary L. Wilhelm created this Life Tributes page to make it easy to share your memories.

Send flowers to the Wilhelm family.