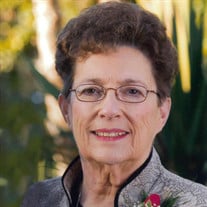 Genevieve Agnes Welsh, 83, of Central City, Iowa, passed away on Tuesday, February 22, 2022, at her home. Family will greet friends and family from 4:00 to 7:00 p.m. on Monday, March 7, 2022, at Murdoch Funeral Home & Cremation Service in Central City, Iowa, with a Parish Vigil Service starting at 6:30 p.m. A Funeral Mass will be held at 11:00 a.m. on Tuesday, March 8, 2022, at St. Joseph Catholic Church, 300 West Avenue in Prairieburg, Iowa. Reverend Nick March will officiate. Burial will follow at St. Joseph Catholic Cemetery in Prairieburg. Genevieve was born on November 8, 1938, in Anamosa, Iowa, the daughter of Clarence and Katherine (Henry) McNamara. She was a 1956 graduate of Fairfax High School in Fairfax, Iowa. Genevieve was united in marriage to Merle “Mick” Taylor Welsh in 1978 in Chandler, Arizona. He preceded her in death. Genevieve worked for Collins Radio in Cedar Rapids, Iowa, for 14 years, and Walmart in Marion, Iowa, for 15 years. She was a member of St. Joseph Catholic Church in Prairieburg. Genevieve enjoyed feeding the birds and spending time with her beloved fur babies, who were all rescue dogs. Genevieve will be greatly missed by all who knew and loved her. Genevieve is survived and lovingly remembered by her three sons, William (Sonja) Rozinek of Joplin, Missouri, Dennis (Cathy) Rozinek of Seaside, Oregon, and Brian Rozinek of Central City; son-in-law, Chuck Moore of Coggon, Iowa; three stepsons, Mike (Donna) Welsh of Cedar Rapids, Ed (Diane) Welsh of Fairplay, Missouri, and Rick (Stacy) Welsh of Marion; 22 grandchildren; numerous great-grandchildren; and one sister, Anna May Petrick of Manchester, Iowa. She was preceded in death by her parents, Clarence and Katherine McNamara; husband, Mick Welsh; daughter, Karen Moore; stepson, Terry Welsh; four brothers; and four sisters. Memorials in Genevieve’s memory may be directed to St. Joseph Catholic Church, 300 West Avenue in Prairieburg, Iowa. John 11:25 -26 Jesus said to her, “I am the resurrection and the life. The one who believes in me will live, even though they die; and whoever believes in me will never die. Do you believe this?”

The family of Genevieve Agnes Welsh created this Life Tributes page to make it easy to share your memories.

Send flowers to the Welsh family.