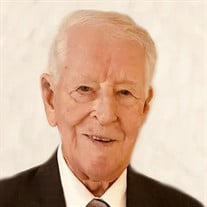 Gerald “Jerry” Clark Buisman, 86, of Marion, Iowa, passed away on Sunday, February 6, 2022, at Dennis & Donna Oldorf Hospice House of Mercy in Hiawatha, Iowa. Family will greet friends and family from 9:00 to 10:00 a.m. on Saturday, February 12, 2022, at St. Joseph Catholic Church in Marion. A funeral mass will be held at 10:00 a.m. on Saturday at the church with Father David O’Connor officiating. Inurnment will take place at Mt. Calvary Cemetery at a later date. The funeral will be livestreamed by St. Joseph Catholic Church at the following link: https://youtu.be/ZenCeHOHUyo. Murdoch Funeral Home & Cremation Service of Marion is assisting the family. Jerry was born on February 27, 1935, in Guttenberg, Iowa, the son of William and Nellie (Ross) Buisman. He was a 1952 graduate of Guttenberg High School and went on to attend Luther College. On October 10, 1959, Jerry was united in marriage to Dixie Lea Warford in Colesburg, Iowa. He served honorably in the United States Army. Jerry worked for Rockwell Collins for 35 years, starting on the assembly line and working his way up to various management positions. He was a devoted fan of the Iowa Hawkeyes, Minnesota State Mavericks, and Minnesota Gophers Soccer. Jerry enjoyed time spent outdoors, hunting, fishing, and golfing. He was an outstanding cook. Jerry and Dixie wintered in Arizona for over 25 years. Jerry will be greatly missed by all who knew and loved him. Jerry is survived and lovingly remembered by his wife of 62 years, Dixie; daughter, Lori (David) Beach of Iowa Falls, Iowa; son, Kevin (Heather) Buisman of Mankato, Minnesota; grandchildren, Kara (Jason) Wagoner, Cody (Callie) Beach, Alyssa (Zach) Sirek, and McKenna Buisman; great-grandchildren, Chelsey Wagoner, Chase Wagoner, Landyn Wagoner, Ayla See, Brielya Beach, Tayah Beach, and Livia Brinkman; and several nieces and nephews. He was preceded in death by his parents, William and Nellie; brother, William Buisman; and sister, Marge Knutson. In lieu of flowers, memorials may be directed to the family for a donation to a charity of their choice.

The family of Gerald "Jerry" Clark Buisman created this Life Tributes page to make it easy to share your memories.

Send flowers to the Buisman family.