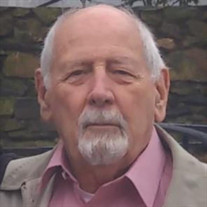 Gerald Edward “Ed” Merritt was born in the house by the entrance to Jordan’s Grove Cemetery in rural Linn County, Iowa on June 23, 1932, the son of Gerald Grant and Martha (Benton) Merritt. At the age of four, he and his family moved to Marion, Iowa. Ed graduated from Marion High School in 1951, and joined the United States Navy, during the Korean Conflict. Upon his discharge in 1955, he returned to Marion, where Ed met Beatrice “Bea” Marie Thomas and they wed on June 27, 1958. Together, they raised their three sons in Cedar Falls and Independence, Iowa. Having learned the tool and die maker trade in the Navy, Ed was first employed with New Era Industries in Cedar Rapids, Iowa, and then by John Deere Waterloo Tractor Works. After 26 years of service, he retired from John Deere in 1985, as the maintenance supervisor at the Engine Plant. Ed worked an additional 10 years at Bachman Tool and Die in Independence, Iowa, where he shared his tool and die maker skills with their employees. During his retirement years, Ed was a greeter at Buffalo Bill Museum in LeClaire, Iowa, and a volunteer with CASA in Scottsboro, Alabama, where he built wheelchair ramps for the elderly. Ed had an avid interest in boating and taught his boys how to water ski and sail with boats he built. He refurbished a houseboat used for family outings on the Mississippi and Tennessee Rivers. Ed was a talented and gifted woodworker. Over the years, he made many wonderful pieces: bedroom sets, cribs, toys, dressers, clocks, tables, chairs, glass-fronted cabinets, bookcases, and much more. He will be greatly missed by all who knew and loved him. Ed passed away at the Virginia Veterans Care Center in Roanoke, Virginia on Tuesday, May 19, 2020, at the age of 87 from complications of dementia. He had been a resident there for nearly two years. A private family graveside service will be held at 10 a.m. on Tuesday, June 2, 2020, at Jordan’s Grove Cemetery in rural Linn County, Iowa. Ed is survived and lovingly remembered by his wife of 62 years, Bea of Hardy, Virginia; three sons, Thomas and his wife, Jamie of Hardy, Virginia, Charles of Chicago, Illinois, and Benton and his wife, Lisa of Lynchburg, Virginia; three grandchildren, Justin and his wife, Virginia of Rochester, Minnesota and Brianna and Lillian both of Lynchburg, Virginia; and two great-grandchildren, Louise and Edward also of Rochester, Minnesota. Ed was preceded in death by his parents; two sisters, Vera and Irene; and his brother, Lewis. In lieu of flowers, memorial donations may be made in Ed’s memory to: Virginia Veterans Care Center, 4550 Shenandoah Avenue N.W.; Roanoke, VA 24017.

Gerald Edward &#8220;Ed&#8221; Merritt was born in the house by the entrance to Jordan&#8217;s Grove Cemetery in rural Linn County, Iowa on June 23, 1932, the son of Gerald Grant and Martha (Benton) Merritt. At the age of four, he and his family... View Obituary & Service Information

The family of Gerald Edward "Ed" Merritt created this Life Tributes page to make it easy to share your memories.

Gerald Edward “Ed” Merritt was born in the house by the entrance...