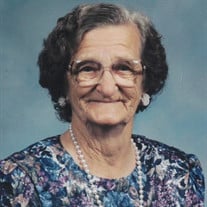 Gertrude “Gertie” Anna Hemphill, 108, of Walker, Iowa, passed away peacefully on April 19, 2021, at her home. She touched so many lives, and was a grandmother to all. While we mourn such a great loss, we celebrate the life of this extraordinary woman. A funeral service will be held at 10:30 a.m. on Saturday, April 24, 2021, at Walker United Methodist Church in Walker, conducted by Pastor Patrick Munyakazi. Family will greet friends one hour prior at the church. Burial will follow the service at Walker Cemetery in Walker. All guests are respectfully requested to wear a face mask and practice social distancing. Gertrude was born on August 19, 1912. Her parents were William and Barbara (Benesch) Wachal and four younger siblings - Lucille, Wilma, William, and Helen. She grew up on farms in rural Walker, and married Gerold Clifton Hemphill on December 23, 1930, at Parsonage United Methodist Church in Walker, Iowa. They later moved to Toddville, then back to Walker in 1964. She belonged to the Maple Grove Club and was the long-time secretary for Cedar Valley Trail Riders. Gertie had nine children – Charles (Mary Jo), Robert (Marilyn), Geraldine (Kenneth), Richard (Jean), Carl, Paul, David, Susan, and Diane – and more than 110 grandchildren, great-grandchildren, and great-great-grandchildren and counting! She was preceded in death by many loved ones and friends, including her husband (Gerold), children (Charles, Robert, Richard, and Diane), six grandchildren, and one great-grandchild. Gertie lived a long, happy life and lived through historic times we have only read about in books. She loved horses and being outside. Despite how fast and crazy the world has become, Gertrude held on to the simple things. Her secrets to living a long life were that family was the most important thing to her and she never stopped moving. Babies always made her smile, and being with all her grandchildren, great grandchildren, and great-great grandchildren was a great joy.

Gertrude &#8220;Gertie&#8221; Anna Hemphill, 108, of Walker, Iowa, passed away peacefully on April 19, 2021, at her home. She touched so many lives, and was a grandmother to all. While we mourn such a great loss, we celebrate the life of this... View Obituary & Service Information

The family of Gertrude "Gertie" Anna Hemphill created this Life Tributes page to make it easy to share your memories.

Send flowers to the Hemphill family.