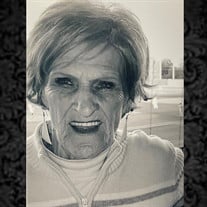 Gertrude “Gertie” Kohl, 86, of Cedar Rapids, Iowa, died Wednesday, February 16, 2022, at her home. A visitation will be held from 4 - 6 p.m. on Tuesday, February 22, 2022, at Murdoch-Linwood Funeral Home & Cremation Service in Cedar Rapids. A funeral service will follow at 6 p.m. on Tuesday at the funeral home. Private inurnment will take place at a later date at Linwood Cemetery in Cedar Rapids. Gertie was born March 26, 1935, in Austinville, Iowa, the daughter of George and Mary (Wenitzes) Feldhoff. She was united in marriage to Verl Lentz in October 1954; the couple later divorced. Gertie worked as head cashier through Aramark at the Rockwell Collins cafeteria. She was also the caretaker for Dr. Campbell Watts, and the patient greeter at PCI. Gertie was united in marriage to Richard Kohl on July 25, 1975, in Cedar Rapids; the couple later divorced. She was a member of St. Stephen’s Lutheran Church in Atkins, Iowa, and the Moose Lodge. Gertie was a Cedar Rapids Kernels fan. She loved playing cards in the apartment community center with her friends. Survivors include her children, Milton (Cathy) Lentz of Cedar Rapids, and Anita (Greg) Trouth of Bailey, Colorado; granddaughter, Stephanie Trask; great-grandson, Collin Trask; niece, Vicki Naber; nephews, Bryce Feldhoff, Jeff and David Lynn; and sister-in-law, Mary Feldhoff. She was preceded in death by her parents; brother, Melvin Feldhoff; and sister, Doris Lynn Memorials may be directed to the American Cancer Society or the Hall-Perrine Cancer Center.

The family of Gertrude 'Gertie' Kohl created this Life Tributes page to make it easy to share your memories.

Send flowers to the Kohl family.