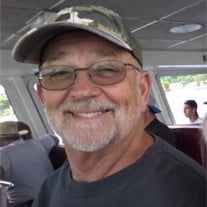 Glen Wilkinson, 67, of Marion, Iowa, lost his battle with brain cancer on Saturday, November 6, 2021, at his home. Celebration of life will be held from 4 to 8 p.m. on Friday, November 12, 2021, at The American Legion, Post 298, 625 31st Street in Marion. Murdoch Funeral Home & Cremation Service of Marion is assisting the family. Glen was born on June 30, 1954, the son of Lewis and Mildred (Vanderlinden) Wilkinson. He was a 1973 graduate of Marion High School. Glen married his high school sweetheart, Jackie, on December 8, 1973. He retired from the City of Cedar Rapids Parks Department after 36 years. He was a member of the SAL Post 298. Glen was very proud of his children and grandchildren. He enjoyed all their sporting events and was their biggest fan. Glen grew up enjoying the outdoors. This continued as many more memories were made at the family cabins in Waubeek and Lake Ponderosa. Glen loved drag racing, watching Minnesota Vikings football, tinkering in his “man cave”, having bonfires, drinking beer, and making others laugh. He will be greatly missed by all who knew and loved him. Glen is survived and lovingly remembered by his wife of 48 years, Jackie (O’Brien); daughter, Stacy (Jason) Miller; son, Greg (Kelly) Wilkinson; grandchildren, Brandon, Sadie, Jacob, and Emma, all of Marion; three brothers, Bill Wilkinson, John (Kathie) Wilkinson, and Dick (Debbie) Wilkinson; sister-in-law, Diane; extended nieces and nephews; as well as many family and friends. He was preceded in death by his parents, Lewis and Mildred Wilkinson and brother Jim. In lieu of flowers, donations can be made to Hall Perrine Cancer Center.

The family of Glen Wilkinson created this Life Tributes page to make it easy to share your memories.

Glen Wilkinson, 67, of Marion, Iowa, lost his battle with brain...

Send flowers to the Wilkinson family.