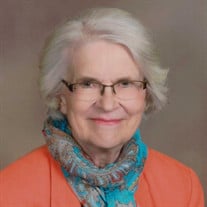 Gloria Jean (Wiebold) Stenzel, 86, of Marion, Iowa, passed from this earth to the loving arms of Jesus on Wednesday, January 26, 2022, at the Dennis & Donna Oldorf Hospice House of Mercy in Hiawatha, Iowa. A funeral service will be held at 11:00 a.m. on Monday, January 31, 2022, at St. Paul’s Lutheran Church in Marion, by Pastor Andy Noble, with a visitation one hour prior at the church. A livestream of the service can be accessed on the church’s Facebook page. Burial will take place at 1:00 p.m. on Tuesday, February 1, 2022, at Pleasant Hill Cemetery in Blairstown, Iowa. Murdoch Funeral Home & Cremation Service of Marion is assisting the family. Gloria was born on January 22, 1936, in Conroy, Iowa, the daughter of Edward George and Anna (Furler) Wiebold. Gloria was baptized and confirmed in the Lutheran Church. She graduated from Blairstown High School in 1954 and went on to attend business college. On July 6, 1957, Gloria was united in marriage to Donald Eugene Stenzel at Grace Lutheran Church in Blairstown. Gloria was an active member of St. Paul’s Lutheran Church. Gloria loved to travel. She was blessed to visit Switzerland in 1996 and walk through the birth home of her mother, Anna Furler. She enjoyed music, playing the piano, and shared that love with her grandchildren, card games, reading, sewing and baking. Most of all, Gloria treasured the special moments with dear family and friends. She was a prayer warrior for all and continued to send cards with special notes until the last month. As Gloria grew older, she was bold to proclaim her love of Jesus to all God put in her path. Gloria is survived and lovingly remembered by her son, Michael (Jan) Stenzel of Centennial, Colorado; daughter, Wendy (Randy) Schlueter of Marion; three grandchildren, Brandon (Lauren) Schlueter, Tyler Schlueter, and Anna Schlueter (fiancé, Doug Davis); two great-grandchildren, Henry and Benny Schlueter and one great-grandson due in March; sister, LaVonne “Vonnie” (Ed) Wilhelmi of Atkins, Iowa; and nieces, nephews and other members of Don’s family. She was preceded in death by her parents; husband; two brothers, Gordon and Edward “Eddie” Wiebold; and three sisters, Lillian and Velma Wiebold, and Johanna “Jo” Wichman; and other members of Don’s family. The family appreciates all the love and compassionate care Gloria received from her doctors and nurses, including the entire staff at Hall Perrine Cancer Center and her caregivers at the Hospice House of Mercy. In lieu of flowers, memorials in Gloria’s memory may be made to St. Paul’s Lutheran Church or the Dennis & Donna Oldorf Hospice House of Mercy in Hiawatha.

Gloria Jean (Wiebold) Stenzel, 86, of Marion, Iowa, passed from this earth to the loving arms of Jesus on Wednesday, January 26, 2022, at the Dennis & Donna Oldorf Hospice House of Mercy in Hiawatha, Iowa. A funeral service will be held at 11:00... View Obituary & Service Information

The family of Gloria Jean Stenzel created this Life Tributes page to make it easy to share your memories.

Send flowers to the Stenzel family.