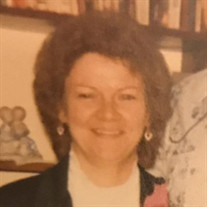 Grace Mary Bents Christensen, 75, of Cedar Rapids, Iowa, passed away on Sunday, October 25, 2020, at her home after a long illness. Per her wishes, cremation has taken place. Friends and family are invited to a graveside service at 1 p.m. on Friday, October 30, 2020, at Linwood Cemetery in Cedar Rapids. A Celebration of Life will follow from 2-4 p.m. at The Legacy Center at Murdoch-Linwood in Cedar Rapids. All guests are respectfully requested to wear a mask and practice social distancing. Grace was born October 21, 1945, in Cedar Rapids, the daughter of Melvin and Dorothy (Wright) Kesselring. On October 13, 1962, she was united in marriage to James Bents; they were later divorced. Grace was later united in marriage to James Christensen on Feb 14, 1985; they later divorced. Grace worked her early years as a bartender in many local taverns and had quite the following serving in the Czech and NewBo area and later near the city barns serving many city and iron workers. All that met her loved her. She loved to go dancing when not working. She later in life became a housekeeper at local hotels and nursing homes. Grace loved spending time with her children and especially her grandchildren; she will be greatly missed by her family. Grace is survived by her two sons, Dorsey ”DJ” (Betty), and Don (Rose) Bents; one daughter, Melissa (Josh) Bradshaw; 11 grandchildren; 12 great grandchildren; sister, Linda (Russell) Stolba, all of Cedar Rapids; and many nieces and nephews. Grace is preceded in death by her parents; three brothers, Melvin Jr., Gary, and Benjamin Kesselring; and two sisters, LaDonna Engle and Gail Folkers. The family would like to thank UnityPoint Hospice for all the care and support the last month. Kennedy, Bobbi Jo, and Angie: a big shout out to your amazing care! Music therapy that came and sat at the edge of her bed and played and sang. Massage therapist for the relaxing massage. Thank you, Thank you!

Grace Mary Bents Christensen, 75, of Cedar Rapids, Iowa, passed away on Sunday, October 25, 2020, at her home after a long illness. Per her wishes, cremation has taken place. Friends and family are invited to a graveside service at 1 p.m. on... View Obituary & Service Information

The family of Grace Mary Bents Christensen created this Life Tributes page to make it easy to share your memories.