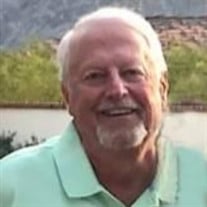 Gregg Jones, 71, of Cedar Rapids, Iowa, died Sunday, October 18, 2020, at UnityPoint St. Luke’s Hospice Unit, Cedar Rapids. Private family services will be held at St. Ludmila Catholic Church and burial will be at Linwood Cemetery, Cedar Rapids. All guests are respectfully requested to wear a mask and practice social distancing. Murdoch-Linwood Funeral Home & Cremation Service assisted the family. Gregg was born December 6, 1948, in Cedar Rapids, the son of Gordon and Barbara (Krumbholz) Jones. He graduated from LaSalle High School in 1966 and received his BBA from the University of Iowa in 1970. Gregg honorably served his country from 1970 – 1972, in the United States Army and was stationed in Germany. He was united in marriage to Kristine “Kris” Barta on August 19, 1977, at St. Ludmila Church. Gregg worked at Joens Brothers Interiors until 1992, and then became a food broker. He logged over 1 million miles in his travels without a single accident. Gregg was a member of St. Ludmila Church and the I-Club. He enjoyed golfing and fishing. He even once got the ever elusive, hole-in-one. Gregg always cheered for the Hawkeyes, Braves and Packers. He was known for being soft spoken with a sly wit and scary smart. He always will be loved and forever missed. Survivors include his wife, Kris Jones; brother, Richard Jones; sister, Karen Barta; and sister-in-law, Nancy Barta, all of Cedar Rapids. He was preceded in death by his parents; sister-in-law, Linda Jones; and brother-in-law, Jim Barta. Memorials may be directed to the American Heart Association and the Zach Johnson Foundation.

The family of Gregg Jones created this Life Tributes page to make it easy to share your memories.