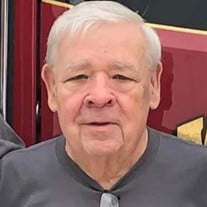 H. Philip “Phil” Snitkey, 73, of Clive, Iowa, formerly of Walker, Iowa, passed away on Thursday, October 15, 2020, at Unity Point Health - Iowa Methodist Medical Center in Des Moines, Iowa. Four months and five days later, one of his sons, Jason Philip Snitkey, 50, also of Clive, and formerly of Walker, passed away on Saturday, February 20, 2021, following a sudden illness, at the University of Iowa Hospital and Clinics in Iowa City, Iowa. Please join the Snitkey family in celebrating the lives of Phil “Pops” and Jason “J” as we Eat, Drink, and Be Irish in their honor. Bring your stories and memories to remember and honor them while having a good time, which is what they had asked for and wanted. An Irish Wake for both Phil and Jason will be held from 3 to 7 p.m. on Saturday, July 24, 2021, at Walker City Park North Pavilion, located at 306 Park Street, in Walker. Feel free to come and go as you please. Food will be served beginning at 4 p.m. and a limited selection of beverages will be available. Please dress casual. BYOB if you would like (just make sure you bring it in a cooler!). Slainté (“Cheers” in Irish)! ************************************************************************************************************* Phil was born December 24, 1946, in Fort Dodge, Iowa, the son of Henry Charles and Catherine P. (Ennis) Snitkey. He was a 1965 graduate of Walker High School and went on to attend Ottumwa Technical School. On October 19, 1968, Phil was united in marriage to Carol Ann McMillen. He worked for Merchant’s National Bank, Banks of Iowa, and Iowa Health Systems, formerly St. Luke’s Hospital in Cedar Rapids, Iowa. In 2002, Phil and Carol moved to Des Moines, where he continued to work for Iowa Health Systems, now known as UnityPoint Health Systems, until his retirement. He was a member of the Walker United Methodist Church, Boy Scouts Walker Troop 501 as an Assistant Leader, a member of the Board of Directors at Walker State Bank, the Walker American Legion Post 376, and a Walker City Council member for many years. Phil then became the Mayor of Walker. He was also a member of the Walker Fire Department, serving as Fire Chief, a board member of the CITA Fire School at Kirkwood, a longtime member of the Iowa Firefighters Association, a founding member of the original Walker Jaycees, and a member of the Masons Mecca Lodge No. 523 of Walker. Phil was a State Conference Judge for the Iowa Future Business Leaders of America. He enjoyed watching sports, a devoted and loyal Iowa Hawkeye fan. Phil also routed for the Chicago Bears and Chicago Cubs. He enjoyed cooking and spending time with family and friends. Phil will be greatly missed by all who knew and loved him. Phil is survived and lovingly remembered by his wife of nearly 52 years, Carol Snitkey of Clive; two sons, Jason Snitkey of Clive and Shawn (Kelly) Snitkey of Cedar Rapids; daughter, Erin Snitkey of West Des Moines, Iowa; one sister, Mary Virginia “Ginger” (Phil) Kuhn of Waukee, Iowa; six grandchildren, Nicole Snitkey, Mason Snitkey, Noel Snitkey, and EmmaLee Snitkey all of Walker, Hannah Snitkey and Brennan Snitkey both of Cedar Rapids; brother-in-law, Art Barron of Marion; sister-in-law, Sherry McKee of Walker; and many nieces, nephews, and cousins. He was preceded in death by his parents; brother, Mark Snitkey; and one sister, Kathleen “Kathy” Barron on August 4, 2020. Memorials in Phil’s memory may be made to the Walker Fire Department located at 210 Park Street, P.O. Box 21, in Walker, Iowa, 52352-0021.

The family of H. Philip "Phil" Snitkey created this Life Tributes page to make it easy to share your memories.

Send flowers to the Snitkey family.