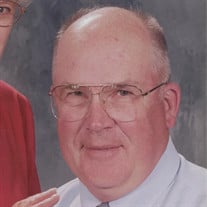 Harold Thomas “Tom” Holland, 82, of Whittier, Iowa, passed away on Tuesday, October 27, 2020, at Living Center West in Cedar Rapids, Iowa. In accordance with his wishes, cremation has taken place. A private family committal service will be held at Jordan’s Grove Cemetery at a later date. Murdoch Funeral Home & Cremation Service of Marion, Iowa is assisting the family. Tom was born on July 16, 1938, in Whittier, Iowa, the son of Hozel and Bertha (Hoge) Holland. He was a 1956 graduate of Central City High School, where he played baseball and served as President of the FFA during his senior year. On June 7, 1959, Tom was united in marriage to Minnie Lou Humble at the Jordan’s Grove Baptist Church. He worked as a machinist for Collins Radio, now Rockwell Collins, for a total of 39 years, retiring in 1995. There, he worked in a machinist shop, where their motto was “If they couldn’t repair it, they could make you a new one just like it”. Tom also worked at the Central City Elevator for a short time. After retirement, he enjoyed helping Carl and Jon Studt with farming in the Whittier area until 2017. Tom also served as a Trustee of the Whittier Community Building. He was a gifted craftsman, and enjoyed woodworking. Tom was always willing to help anyone at any time. He will be greatly missed by all who knew and loved him. Tom is survived and lovingly remembered by his wife of 61 years, Minnie Holland of Whittier; two sisters, Roberta (Ed) Hoffmann of Cedar Rapids and Anita (Gerald) Silver of Central City; two sisters-in-law, Faye Remington of Marion and Gloria Fowler of Anamosa; one brother-in-law, George Humble of Anamosa; and several nieces and nephews. He was preceded in death by his parents; one sister, Phyllis Holland; father-in-law and mother-in-law, George and Leona Humble; and two brothers-in-law, Sam and Garry Humble. Mrs. Holland would like to express her heartfelt gratitude to John and Jackie Bohlken and their two sons for all the love, care, and support they gave to her and Tom over the years. It was always something different, but they were always there to help in every way, large or small. It will never be forgotten.

The family of Harold Thomas "Tom" Holland created this Life Tributes page to make it easy to share your memories.

Send flowers to the Holland family.