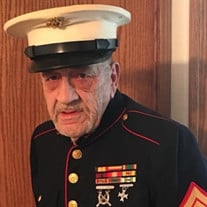 Harold “Gene” Scadden, Sr., 80, of Cedar Rapids, Iowa, passed away on Sunday, August 29, 2021, at his home. Graveside services with full military honors and visitation will be held at 1 p.m. on Thursday, September 2, 2021, at Memory Gardens Cemetery, 2600 Muscatine Avenue in Iowa City, Iowa. Murdoch Funeral Home & Cremation Service in Marion is assisting the family. Gene was born on March 6, 1941, in Iowa City, Iowa, the son of Harold and Gurna (Bearden) Scadden. He graduated high school from Marshalltown High School and went on to serve honorably in the United States Marine Corps during the Vietnam War. Gene was united in marriage to Marlene Serbousek on May 2, 1964, at the Center Point United Methodist Church in Center Point. He was a truck driver for Nash Finch Company for 14 years and then worked for Linn County Secondary Roads Department, retiring in 2003. Gene was a member of the Marion American Legion. He will be greatly missed by all who knew and loved him. Gene is survived and lovingly remembered by his wife, Marlene Scadden of Cedar Rapids; two daughters, Tina Scadden (Nick Clark) of Cedar Rapids and Trudy (Larry) Grieff of Omaha, Nebraska; son, Butch Scadden of Vinton, Iowa; nine grandchildren; and two great-grandchildren. He was preceded in death by his parents; and sister, Donna Hoffman.

The family of Harold Eugene Scadden created this Life Tributes page to make it easy to share your memories.

Send flowers to the Scadden family.