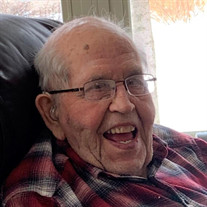 Harold ‘Richard’ Whittlesey, 94, of Des Moines, Iowa, formerly of Cedar Rapids, Iowa, died Friday, March 4, 2022. Celebration of Life: 11:00 a.m. on April 22, 2022, at Murdoch-Linwood Funeral Home & Cremation Service in Cedar Rapids. Visitation with family one hour prior to services. A livestream of the celebration may be accessed on the funeral home website tribute page for Richard, under “photos and videos,” starting at 11 a.m. Friday, April 22, 2022. Richard was born January 22, 1928, in Humboldt County, Iowa, the son of Lester and Sarah (Himrod) Whittlesey. He graduated from Gilmore City High School and went on to attend Iowa State University. Richard served honorably in the United States Navy from 1949-53 during the Korean conflict. He was united in marriage to Marilyn Haight on February 22, 1960, in Cherokee, Iowa. Richard farmed the family farm until 1974 when he relocated to Oelwein, Iowa where he worked for DeKalb until his retirement. Richard sang in multiple church choirs over the years. He was a devoted husband, father and grandfather. He taught his family how to play 500 and pinochle the ‘Navy way’. Much of his time in later years was spent playing cards. Survivors include his children, Ardene Whittlesey of Tucker, Georgia, Peter (Theresa) Whittlesey of Fairfax, Iowa and Karen and Sharon Whittlesey, both of Des Moines. Also surviving are four grandchildren Blake, Richelle, Zach and Delaney Whittlesey as well as many loving family members and friends. He was preceded in death by his parents, Lester and Sarah Whittlesey; wife, Marilyn in 2014; and siblings, Dorothy Bristol and Donald Whittlesey. Memorials may be directed to Hospice of Midwest, Hillcrest Family Services or a charity of your choice.

The family of Harold 'Richard' Whittlesey created this Life Tributes page to make it easy to share your memories.

Send flowers to the Whittlesey family.