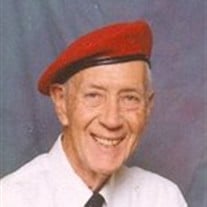 Harry P. Lees, Jr started singing his way through life February 13, 1923 in Waleetka, Oklahoma, son of Harry P. Lees, Sr. and Nellie Adamson. At a young age Harry helped worked in the family store and started singing in the church choir. Harry’s trademark in life became his enthusiastic greeting of a hug and a song. He loved to combine humor and music singing “Said My Pajamas” …… I climbed up the door, and opened the stairs; I said my pajamas and put on my pray'rs, I turned off the bed and crawled into the light And all because you kissed me (kiss) goodnight. Harry was the husband of Esther for thirty-five years; father of Mary Kay (Tom) Hennessey of Fayetteville, NC; Marty (Cindy) Lees of Aurora, Colorado; Deborah (Jim) Lane of Howard, Kansas; Judith (Dennis) Johnson of Owatonna, Minnesota; Susan (Robin) Lees of Fayetteville, NC; Rebecca Lees of Denver, Colorado; David (Robin) Lees of Cedar Rapids, Melinda (Chuck) Cree-Anthony of Des Moines, Iowa; Leisa Rosche of Coralville; Cynthia (David) Rosche of Ft. Worth, Texas; Yvonne Shackelford of Marion, Iowa; Yvette (Roland) Vargovich of Buford, Georgia. Grandfather of 18 and Great-Grandfather of four. Harry is also survived by his younger sister Elizabeth Pinter of England. Harry had degrees in history, music education and divinity. He served in the Army Signal Corps with his trumpet in the band; as a public school teacher he taught all twelve grades of vocal and instrumental music as well as high school world history and French. After this he served as a Methodist minister for 12 years. Harry’s life of service also included: Dunkin Donuts baker, Domino’s Noid, meat packer, mobile home trucker, milk delivery which required three people to replace him. He worked at Fareway until the age of 83 where he was known for dishing out compliments and serenades. All through his life Harry sang in the choir most recently for 35 years at the First United Methodist Church of Marion, Iowa and led singing at Milestones. Harry you have taught us all to sing, to serve, and to laugh by living a life of love and great faith. You will be missed! A special thanks to Yvonne for all her care during Harry’s last several months. A memorial service will be held Monday November 17, 2008 6:00 pm at First United Methodist Church of Marion, Iowa. In lieu of flowers, donations can be made in Harry’s name to Milestones of Marion or First United Methodist Church, Marion, Iowa.

The family of Harry P. Lees, Jr. created this Life Tributes page to make it easy to share your memories.

Send flowers to the Lees, family.