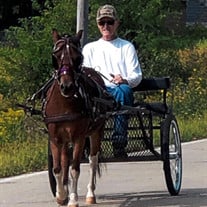 Howard Lee Duckett, 77, of Central City, Iowa, passed away on Wednesday, February 17, 2021, surrounded by his family at his home. Howard’s wishes were to donate his body to help others through the University of Iowa, Department of Anatomy and Cell Biology, Deeded Body Program for medical education and research. A Celebration of Howard’s Life will be held from 11 a.m. to 2 p.m. on Saturday, May 1, 2021, at the American Legion Wapsie Post #421 in Central City. All guests are respectfully requested to wear a face mask and practice social distancing. Howard was born on January 31, 1944, in Oelwein, Iowa, the son of Fred and Lola (Rosenstiel) Duckett. He attended Hazelton Consolidated School and then Kirkwood Community College. On March 25, 1983, Howard was united in marriage to Cheryl Lynn Greve. He worked for 25 years as a General Superintendent for Lear Corporation, retiring in 2006. Howard was a Boy Scouts Den Leader, a member of Antioch Christian Church, and a lifetime member and past President of the Iowa Quarter Horse Racing Association. He had a passion for all animals, and enjoyed fishing, family get-togethers, and going on trips in his R.V. Most of all, he loved spending time with his family. Howard will be greatly missed by all who knew and loved him. Howard is survived and lovingly remembered by his wife of nearly 40 years, Cheryl Duckett of Central City; nine children, Dawn (Brian) Thornton of Madison, Mississippi, Justin (Tess) Duckett of Ely, Iowa, Brandon (Chelsea) Duckett of Las Vegas, Nevada, Mark (Betty) Duckett of Solon, Iowa, Brendalee (Rodger) Goracke of Oklahoma City, Oklahoma, September (Adam) Sackett of Belle Plaine, Iowa, Bob Duckett of Cedar Rapids, Iowa, Brian (Ronda) Duckett of Mt. Vernon, Iowa, and Kevin (Kari) Fernandez of Stillwater, Minnesota; 22 grandchildren; ten great-grandchildren; two sisters, Donna (Jim) Mohlis and Della Stohr both of Hazelton, Iowa; one brother, Harold (Darlene) Duckett of Central City; one brother-in-law, Mark (Carol) Greve of Iowa City, Iowa; one sister-in-law, Joan (Steve) Clary of Central City; and many nieces and nephews. He was preceded in death by his parents, Fred and Lola Duckett; father-in-law, Robert Greve; three brothers and two sisters-in-law, Clifford, Clarence (Evie), and Calvin (Jean) Duckett; one brother-in-law, Lloyd Stohr; one nephew, Donnie Stohr; one grandson at infancy; and nephew, Brian Mohlis. Howard’s family would like to express their sincere gratitude to the staff with Mercy Hospice, especially Amanda, Chari, Bill, and Jody, for the love, care and compassion they gave to Howard during his illness. Memorials in Howard’s memory may be directed to the Mercy Foundation at 701 10th Street SE, in Cedar Rapids, Iowa, 52403.

Howard Lee Duckett, 77, of Central City, Iowa, passed away on Wednesday, February 17, 2021, surrounded by his family at his home. Howard&#8217;s wishes were to donate his body to help others through the University of Iowa, Department of Anatomy... View Obituary & Service Information

The family of Howard Lee Duckett created this Life Tributes page to make it easy to share your memories.

Howard Lee Duckett, 77, of Central City, Iowa, passed away on...

Send flowers to the Duckett family.