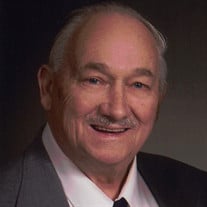 Howard Lannom, 88, of Cedar Rapids, Iowa, formerly of Vine, Tennessee, died Thursday, June 17, 2021, at Living Center West. Visitation: 5-7 pm Sunday, June 20 2021, at Murdoch-Linwood Funeral Home and Cremation Service, Cedar Rapids, Iowa. Funeral Service: 10:00 a.m. Monday, June 21, 2021, at the funeral home. Burial with military honors: Linwood Cemetery, Cedar Rapids. Howard was born on June 25 1932, in Vine, Tennessee, the son of James Monroe and Mattie (McPeak) Lannom. Howard accepted Christ and was baptized in a creek in Vine, Tennessee in 1942. He worked on the family farm with his daddy and older brother until he was drafted into the U.S. Army in 1953. He served at Newfoundland and Labrador, Canada and Fort Eustis, Virginia. Shortly after returning home from the U.S. Army, Howard moved to Cedar Rapids and went to work for Pennick & Ford where he retired from after more than 30 years of service. Howard and Shirley married in Cedar Rapids in 1989. He loved spending time with family and friends and enjoyed bowling, traveling, eating good food and listening to country music. He was a fan of the Grand Ole Opry in Nashville Tennessee and visited on multiple occasions. Howard was entered into the Hall of Fame in the Library for the Moose International Bowling Tournament for doubles in 1963. He especially enjoyed spending time with his family, grandchildren, and friends. Howard is survived by daughter, Dee (Allen) Greer of Cedar Rapids; grandchildren, Isaac and Emma; brother, Mark (Debbie) Lannom of Lebanon, Tennessee; sisters-in-law, JoAnn Lannom of Springville, Iowa, and Judy (Joe) Medakovich of Nebraska; and many nieces and nephews. He was preceded in death by his parents; wife, Shirley Lannom; and brothers, Ray Lannom and Douglas Lannom. Memorials may be directed to the family.

The family of Howard Lannom created this Life Tributes page to make it easy to share your memories.

Send flowers to the Lannom family.