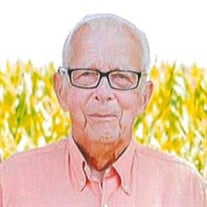 Hugh Weis, 95, of Swisher, Iowa, died Wednesday, December 15, 2021. A funeral service with military honors will take place at 2 p.m. on Monday, December 20, 2021, at Murdoch-Linwood Funeral Home & Cremation Service in Cedar Rapids, Iowa, with a visitation one hour prior. Burial will follow the service at Cedar Memorial Park Cemetery in Cedar Rapids. Hugh was born August 10, 1926, in Cedar Rapids, Iowa, the son of Lewis and Jesse (Wright) Weis. He graduated from high school and went on to serve honorably in the United States Army during World War II. Hugh was united in marriage to Geneva “Neva” Reed on October 6, 1950. He worked in the sanitation department at Quaker Oats for 42 years before his retirement; Hugh was a member of the Quaker Old Timers. He enjoyed the outdoors and raising his farm animals. Hugh loved his cat, Spot. He will be greatly missed by those who love him. Survivors include his children, Sheryl Brecht of Swisher, and Dean (Maribel) Weis of Cedar Rapids; grandchildren, Kirk (Alicia) Brecht, Kasey Brecht (Heather Hovey), all of Swisher, Emily Weis, and Olivia Weis, both of Cedar Rapids; great-grandchildren, Lucas and William Brecht; special niece, Paula (Harold) Nielsen of Walker, Iowa; special nephew, Mitchell (Janet) Gericke of Walker; and many nieces, nephews, and extended family members. He was preceded in death by his parents, Lewis and Jesse Weis; wife, Neva in 2004; and son-in-law, Bill Brecht.

The family of Hugh Weis created this Life Tributes page to make it easy to share your memories.

Send flowers to the Weis family.