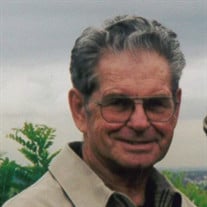 Ivan Earl Rohde, 92, of Marion, Iowa, passed away on Thursday, October 22, 2020, at Terrace Glen Village in Marion, Iowa. Due to the pandemic, a private graveside service will be held at 11 a.m. on Monday, October 26, 2020, at Mt. Calvary Cemetery in Cedar Rapids, Iowa, conducted by Deacon Jeff Voelker. Military honors will be accorded by the Iowa Army National Guard Honors Detail. Murdoch Funeral Home & Cremation Service in Marion is assisting the family. Ivan was born on March 19, 1928, in Viola, Iowa, in Sac County. He grew up in Wall Lake, Iowa. Ivan was a 1945 graduate of Wall Lake High School and went on to graduate from the University of Iowa. He was very proud to have served honorably for his country as an active duty member of the United States Army during the Korean War. Ivan loved to garden, fish, hunt, raise Cairn terriers, and to tell stories about all of these. His working life was spent at various jobs in Wall Lake, The Airliner in Iowa City, Wilson’s, Culver Tires, and ISO in Cedar Rapids. Ivan is survived and lovingly remembered by his wife, Eleanor Rohde of Marion; stepdaughter, Collette Darden; three step-grandchildren; one great-step-grandson; niece, Deborah (Bruce) Laursen; five nephews, Danny Boom, David Boom, Dana Boom, Dennis Wright, and Bruce Wright; and three great-nephews and great-nieces. He was preceded in death by his parents; two brothers, Mike and Pat Wright; and a sister, Ida Mae (Wright) Boom. The family acknowledges the loving care Ivan has received from the health care workers at Terrace Glen Village and Mercy Hospice. In lieu of flowers, donations in Ivan’s memory may be made to Parkinson’s Research at Michael J. Fox Foundation, P.O. Box 5014 in Hagerstown, Maryland, 21741-5014.

Ivan Earl Rohde, 92, of Marion, Iowa, passed away on Thursday, October 22, 2020, at Terrace Glen Village in Marion, Iowa. Due to the pandemic, a private graveside service will be held at 11 a.m. on Monday, October 26, 2020, at Mt. Calvary Cemetery... View Obituary & Service Information

The family of Ivan Earl Rohde created this Life Tributes page to make it easy to share your memories.

Send flowers to the Rohde family.