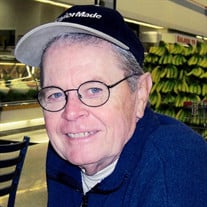 Jack Barker, 83, after a long journey died peacefully on Sunday, November 28, 2021. A visitation will be held from 4:00 to 6:00 p.m. on Wednesday, December 8, 2021, at Murdoch Funeral Home & Cremation Service in Marion, Iowa. A memorial service will be held at 11:00 a.m. on Thursday, December 9, 2021, at the funeral home. Face masks are strongly suggested. Jack was born on March 13, 1938, in Ames, Iowa, the son of Mary G. (Miller) and Rolla A. Barker. He grew up on a farm near Springville, Iowa, where he graduated high school and went on to attend Coe College. He served in the Army Reserve from 1959 until 1965, with a rank of Staff Sargent. He met his wife, Doris, at the 4th of July Celebration in Whittier, Iowa. They married in June of 1960, and to their union three children were born, Cheryl, Molly, and Jeff. Jack worked at Collins Radio for nine years, starting as an inventory clerk, left as a supervisor of 100 people, and was instrumental in changing IBM punch cards to computer generated information. In 1966, he was recruited by Amana Refrigeration to set up their computer system for their warehouse, which eliminated yearly inventory. He retired as the Service Parts Material Manager with 31 years of service. He groomed many for higher positions in the world of business. He loved sports and coached his children in their sports, filming Marion High School football for 15 years, as well as being active in Booster Club, a referee for High School boys’ and girls’ basketball plus district finals. He was a member of First Presbyterian Church, and served as an Elder, Deacon, and Chairman of the ushers. His wife, children, grandchildren, and great-grandchildren were his pride and joy. He loved supporting them in all their activities. Upon retirement, traveling, bowling, golfing, and participating in the tractor cade filled his days. Jack was well liked by all, and always had a joke or story to tell. Jack will be greatly missed by all who knew and loved him. Jack is survived and lovingly remembered by his wife of 61 years, Doris of Marion; children, Cheryl (Mark) Klopfenstein of Marion, Molly Barker of Chandler, Arizona, and Jeff Barker of West Des Moines, Iowa; grandchildren, Jaclyn (Jeremy) Allen, Jake (Megan) Klopfenstein, Kayla (Jake) Guenther, Jack Barker, Danny Barker; and great-grandchildren, Ace, Cy, Bella and Josiah. He was preceded in death by his parents; and brother, Bill Barker. In lieu of flowers, memorials in Jack’s memory may be made to the family.

Jack Barker, 83, after a long journey died peacefully on Sunday, November 28, 2021. A visitation will be held from 4:00 to 6:00 p.m. on Wednesday, December 8, 2021, at Murdoch Funeral Home & Cremation Service in Marion, Iowa. A memorial service... View Obituary & Service Information

The family of Jack Barker created this Life Tributes page to make it easy to share your memories.

Jack Barker, 83, after a long journey died peacefully on Sunday,...

Send flowers to the Barker family.