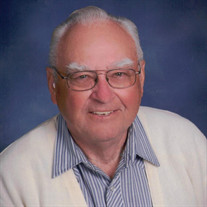 Jack Junior Lorence, 93, of Marion, Iowa, passed away peacefully on Tuesday, February 2, 2021, at St. Luke’s Hospital in Cedar Rapids, Iowa. A Celebration of Life will be held at a later date. Murdoch Funeral Home & Cremation Service in Marion is assisting the family. Jack was born on February 4, 1927, in Cedar Rapids, Iowa, the son of John and Ursula (Armstrong) Lorence. He graduated from McKinley High School in 1944 and then served in the United States Navy during World War II. On October 15, 1949, at the Methodist Church in Center Point, Iowa, Jack was united in marriage to Jean Larose Goodlove. He was employed at Rockwell Collins for 40 years. Jack also owned Frame Art and enjoyed helping his son-in-law and daughter run the seed warehouse and farming. Jack was a member of Lutheran Church of the Resurrection in Marion and the Marion American Legion Post #298, were he was a past commander and remained very active. He also stayed connected with many of his Navy comrades. Jack was active with the Boy Scout organization and a troop leader for many years. He enjoyed framing projects and wood working. Each year he made wooden Christmas ornaments for the kids and grandkids. Jack also loved spending time fishing, playing cards at Lowe Park, polka dancing, and doing puzzles. He was a perfectionist and jokester who loved spending time with his family and friends. He is survived and lovingly remembered by his son, Jon (Joan) Lorence of Solon, Iowa; daughter, Judy (Richard) Burns of Marion; grandchildren, Carrie (Matt) Olmstead, Ryan (Shelly) Burns, Kelly (Ryan) Hemphill, Dana (Jamie) Tiernan, Jena (Robert) Kline, Jesse (Tyson) Branscomb, and Jill (Rusty) Exline; 21 great-grandchildren with one on the way; and siblings, Gerry (Louis) Stolba and Janet (Walt) Schulz, all of Marion. Jack was preceded in death by his parents; wife, Jean Lorence; and brother and sister-in-law, Everett and Harriet Lorence.

The family of Jack Junior Lorence created this Life Tributes page to make it easy to share your memories.

Send flowers to the Lorence family.