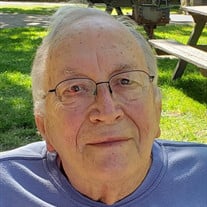 Jack Gilbert Sedlacek, 89, was born November 12, 1932, in Cedar Rapids, Iowa, the son of Milo and Tillie Sedlacek. He entered eternal life on May 6, 2022, after a valiant fight against many health issues the past seven years. Jack was educated in the Cedar Rapids Schools, Arthur, Franklin (midyear Class of 1951) and Coe College, Class of 1961. He served four years (1953-57) in the Air Force as a Weatherman with duty in Japan and Korea. Jack will be remembered by many as a gifted musician beginning with his first public appearance on the steps of Brucemore at the age of 5 playing his accordion. He continued his musical career playing accordion, tuba, trombone, and piano with many local and area bands and as a pianist at the Roosevelt Hotel, Von Maur and the Lighthouse until his health forced his retirement in 2015. Jack also was an instrumental music teacher at Alburnett and Benton Community Schools. After leaving teaching, he was employed by several contracting and home improvement businesses in the Cedar Rapids area and provided a handyman helping hand to many. His last employment was with the Murdoch Funeral Homes, a job he thoroughly enjoyed. Jack loved people and never forgot a name in all his years as an educator, a musician and in business as well as the many medical professionals he met in the past several years. He also loved the outdoors spending many years of his life at a home in the Cottage Reserve Area of Lake McBride and later at the Johnston family farm near Hopkinton, Iowa. He was active as a member of Westminster Presbyterian Church in Cedar Rapids, serving as an elder, deacon, choir member, Men’s Breakfast organizer and participating in Mission Work Trips. Jack married Connie Becker in 1959 and later divorced. They were the parents of Jeffrey, John, and James. Jack married Joyce Johnston on July 1, 1989. Jack is survived by his wife, Joyce; sons, Jeff (Teresa) Sedlacek of Solon, Iowa, John (Maria) Sedlacek of Moscow, Iowa, and Jim Sedlacek of Wayland, Iowa. Also, surviving are granddaughters, Sara Sedlacek (Rob Krysh) of West Liberty, Iowa, Lindsey (Jose) Meza of Solon, Iowa, Taylor Sedlacek of Iowa City and Cheyenne (Steve) Wirics of Fenton, Missouri; four great-grandchildren, Evzen and Rene Meza and Ruby and Logan Sedlacek-Krysh; and Jack’s sister, Patricia Metcalf of Dayton, Ohio. Jack was preceded in death by his parents and Patricia’s husband, Charles Metcalf. A funeral service for Jack will be held at Westminster Presbyterian Church in Cedar Rapids on Thursday, May 12, 2022, at 10:30 a.m. with a lunch and visitation following. The family will be available an hour before service. Burial will be at the Hopkinton, Iowa, Cemetery at 2:30 p.m. the same day. A livestream of the funeral service may be accessed on the funeral home website tribute page for Jack, under “photos and videos,” starting at 10:30 a.m. on Thursday, May 12, 2022. Memorial donations may be made in Jack’s name to the Eastern Iowa Honor Flight or Westminster’s Loaves and Fishes.

Jack Gilbert Sedlacek, 89, was born November 12, 1932, in Cedar Rapids, Iowa, the son of Milo and Tillie Sedlacek. He entered eternal life on May 6, 2022, after a valiant fight against many health issues the past seven years. Jack was educated... View Obituary & Service Information

The family of Jack Gilbert Sedlacek created this Life Tributes page to make it easy to share your memories.

Send flowers to the Sedlacek family.