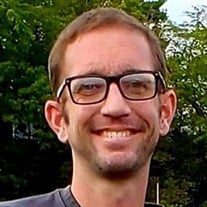 Jacob “Jake” Hahesy, 34, of Manchester, Iowa, passed away on Friday, July 9, 2021, at Regional Medical Center, with his family by his side. Visitation will be held from 4 to 8 p.m., Tuesday, July 13, 2021, at Bohnenkamp-Murdoch Funeral Home & Cremation Service, Manchester. Memorial Service will be held at 10:30 a.m., Wednesday, July 14, 2021, at the Funeral Home. A lunch will follow at the Gathering Place in Manchester. Jake was born January 31, 1987, in Cedar Rapids, Iowa, the son of William “Bill” Hahesy and Peggy (Peyton) Hahesy Hill. He graduated from West Delaware High School in 2005. Jake was employed by Collins Aerospace in Manchester as a certified operator and also owned J&A Power Washing. Jake did various odd jobs throughout his life, but most of all he loved his work at Collins Aerospace, where he was known as the “Rooster of the hen house”. He enjoyed participating in local Demo Derby’s, going kayaking and fishing, spending time outdoors and barbequing with friends and family. He was a collector of many things but most of all loved his family. Jake is survived by his parents, William and Chanda Hahesy II of Creston, Iowa and Peggy and Dennis Hill of Corning, Iowa; siblings, William and Ashley Hahesy III of Marion, Iowa, Faith “Annie” Hahesy of Corning, Iowa, Parke “Muffy” (Nate Kielts) Hahesy of Lake City, Minnesota, Aubrey Hahesy of Ames, Iowa, Bill and Lisa Hill of Council Bluffs, Iowa, Laurie and Mike Ross of Klamath Falls, Oregon, Jason and Tonya Hill of Treynor, Iowa, Linda and Richard Sharp of Bedford, Iowa, Nick and Andrea Hill of Omaha, Nebraska, William (Kayla Price) Roberts of Knoxville, Iowa, and Bryanna Moreland of Creston, Iowa. Special Friend, Ashley Pasker and son Aiden Chopard of Manchester; his aunts and uncles, Julie and Doug Walthart, Bobbie (Alex Finger) Dlouhy, Boone and Amy Hahesy, Rick and Jenny Hahesy, Barb Aulwes, Deb and Ed Simon and many nieces, nephews and cousins. He was preceded in death by his grandparents, Bob and Carol Peyton, and Jean Hahesy; great-grandparents, Francis and Jeanette Hansel; nephew, Cannon Simmons and many other loving family members. The Family would like to thank the Sullivan Family, Cody Hahesy (who he loved like a little brother), The Demolition Derby Family and Collins Aerospace work family for all the love they have shown to Jake. Please share a memory of Jake at www.murdochfuneralhome.com under obituaries

The family of Jake Hahesy created this Life Tributes page to make it easy to share your memories.

Send flowers to the Hahesy family.