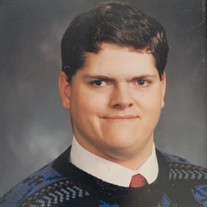 James Michael Akers, 47, of Independence, Iowa, passed away on Tuesday, January 25, 2022, at Buchanan County Health Center in Independence. A memorial service will be held at 10:30 a.m. on Saturday, February 5, 2022, at Murdoch Funeral Home & Cremation Service in Central City, Iowa, with a visitation one hour prior to the service at the funeral home. James was born on June 21, 1974, in Cedar Rapids, Iowa, the son of Jerry D. and Nancy L. (Bebber) Akers. He was a 1995 graduate of Prairie High School in Cedar Rapids. James worked in a grocery store and for Goodwill in Cedar Rapids and he will be greatly missed by all who knew and loved him. James is survived and lovingly remembered by his parents, Jerry and Nancy Akers of Central City, Iowa; one sister, Suzanne Akers of Cedar Rapids; four brothers, Jerry D. (Mickey) Akers, Jr. of Palo, Iowa, Bradley (Dawn) Akers of Cedar Rapids, Scott (LuAnn) Akers of Fairmont, Minnesota, and Jeffrey (Kathy) Akers of Oskaloosa, Iowa; numerous nieces, nephews, and cousins that he dearly loved; two uncles, Merle (Joan) Akers of Central City, and Mark (Julie) Bebber of Cedar Rapids; and one aunt, Maxine Bebber of North Buena Vista, Iowa. He was preceded in death by his grandparents, Jerry and Wilma (Price) Akers, and Lou and Bernice (Batcheldar) Bebber; one aunt, Patricia Hinegardner; and one uncle, Larry Bebber. It takes a village to raise a child, and that is especially true of special needs children. James’ family would like to extend a special thank you to the schools, churches, Discovery Living in Cedar Rapids, Penn Center in Delhi, and B&D Housing in Independence, especially to Julie, Jenna, Jessica, Joni and Amy. It is difficult to remember everyone that should be thanked, but please know that the family is grateful for all the care James received over the years. In lieu of flowers, memorials in James’ memory may be directed to Camp Courageous at 12007 190th Street in Monticello, Iowa, 52310.

The family of James Michael Akers created this Life Tributes page to make it easy to share your memories.

James Michael Akers, 47, of Independence, Iowa, passed away on...

Send flowers to the Akers family.