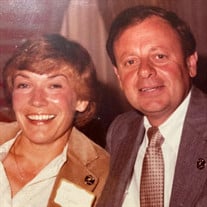 James L. “Jim” Chipokas, 89, of Cedar Rapids, Iowa, died Sunday, October 25, 2020, at Mercy Medical Center, Cedar Rapids. Private family services will be held and burial will take place at Linwood Cemetery, Cedar Rapids. Murdoch-Linwood Funeral Home & Cremation Service, Cedar Rapids, assisted the family. Jim was born April 26, 1931, in Cedar Rapids, Iowa. He was the son of Louis and Joanna Chipokas who emigrated from Greece and landed at Ellis Island. Jim spoke fluent Greek and was particularly proud of his heritage. After serving in the US Army during the Korean War, Jim received a Juris Doctor from the University Of Iowa College Of Law in 1960. While in his graduate years, Jim found the love of his life, Ruth Ann Anderson. Jim practiced law in Cedar Rapids for over 40 years. He was also very involved in commercial real estate and had a knack for finding opportunities. Jim had a passion for sports, he love the St. Louis Cardinals, the Iowa Hawkeyes, and his Sons’ Wolverines. Jim was an accomplished golfer who always had a helpful tip for anyone he might find on the range. In his later years, he could be seen most days playing the back nine with Ruth Ann. He taught his kids, Mark, Scott and Joanna, the game he truly loved. Jim was the founder of the Hawkeye Rebounders, a group of Cedar Rapids businessmen that promoted Iowa Basketball. Starting in 1982, the Rebounders brought the Big Ten v. ACC Super Shootout to the Five Seasons Center. The Super Shootout was a nationally broadcast college all-star game and continued for three years. Always putting family and education first, Jim was particularly proud of his kids, their families, and their academic accomplishments. Survived by his wife of 56 years, Ruth Ann; his children, Mark (Colleen), Scott, and Joanna (Alex) Ringsby; five grandchildren, Courtney, and Ashley Chipokas, Callista, Lexi and Jimmy Ringsby, he will be greatly missed. You were the best Father. We are so proud of you and will cherish every day we had with you. Jim was a devout member of the St. John’s Greek Orthodox Church. Jim’s father was involved in starting the church in Cedar Rapids. We are eternally grateful to the nurses and physicians in the COVID unit and the ICU floor at Mercy Hospital for the exceptional care and comfort provided. In lieu of flowers, memorials may be made to St. John the Baptist Greek Orthodox Church, 501 A Avenue NE, Cedar Rapids, Iowa 52401 or Mercy Employee Relief Fund at the Mercy Foundation, 701 10th Street SE, Cedar Rapids, Iowa 52403.

The family of James L. 'Jim' Chipokas created this Life Tributes page to make it easy to share your memories.

Send flowers to the Chipokas family.