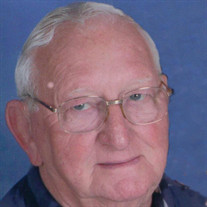 James V. “Jim” Graybill, 82, of Manchester, Iowa, passed on Tuesday, January 11, 2022, at Regional Medical Center in Manchester with his family by his side, after a two-year battle. A Celebration with burial at Oakland Cemetery will be held at a later date. Bohnenkamp-Murdoch Funeral Home & Cremation Service, Manchester is assisting the family. Jim was born on September 29, 1939, the son of Wayne and Laura (Goldsworthy) Graybill and was raised in Dundee, Iowa. After graduation from Dundee High School in 1957, he attended US Trade School in Kansas City, Missouri for Auto Mechanics. He was a mechanic at Wallace’s Inc. where he met his wife of 61 years Pat Hamblin. Jim went on from there to be a partner at Andrews Brothers Standard Station for several years. In the 70’s Jim ran the local Gulf/IOCO/ and in the 80’s Graybill & Sons Shell Station, and Sons Auto Sales with the help of his sons. Jim loved motorcycles, cars and collecting convertibles. After working at Prestolite Battery as a Maintenance Supervisor for a few years he acquired his Real Estate license. Jim was co-founder/co-owner of F&G Realty for 31 years where he sold houses and invested in his own rental properties in the Manchester area. Jim and Pat enjoyed spending the winters in Fort Meyers, Florida and their summers on Lake Delhi over the past 26 years. Jim was a member of the Iowa National Guard for 7 years, served on the Manchester Fire Department for 14 years and a member of Iowa Firefighters Association. Jim is survived by his wife of 61 years, Pat Graybill; sons, Brian Graybill (special friend Kristy Sargent) and Kevin (Ronda) Graybill all of Manchester; five grandchildren, Adam Graybill, Brett Graybill, Danielle (Landon) Schropp, Kaitlyn (Parker) Hunt and Jared Graybill (Fiancée Olivia Miller); and one great-granddaughter, Piper Jo Hunt. He was preceded in death by his parents, Wayne and Laura; sons, Scott and Shawn Graybill; and a brother and his wife, John and Gayle Graybill. Please share a memory of Jim at www.murdochfuneralhome.com under obituaries.

James V. &#8220;Jim&#8221; Graybill, 82, of Manchester, Iowa, passed on Tuesday, January 11, 2022, at Regional Medical Center in Manchester with his family by his side, after a two-year battle. A Celebration with burial at Oakland Cemetery will... View Obituary & Service Information

The family of James "Jim" V. Graybill created this Life Tributes page to make it easy to share your memories.

Send flowers to the Graybill family.