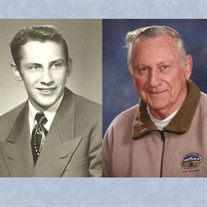 James “Jim” Allen Hansen, 88, of Walker, Iowa, a man of strong faith, left for his Heavenly home on Saturday, October 2, 2021, at home. Family will greet friends and family from 4 to 7 p.m. on Wednesday, October 6, 2021, at Walker United Methodist Church in Walker. A funeral service will be held at 10:30 a.m. on Thursday, October 7, 2021, at the church. Burial with military honors will follow at Walker Cemetery in Walker. Murdoch Funeral Home & Cremation Service of Center Point, Iowa, is assisting the family. Jim was born on April 30, 1933, at home in Britt, Iowa, the son of Robert and Evelyn (Rapp) Hansen. It was said that he weighed 11 pounds as the doctor hefted him into the air as a guess. Jim was baptized and confirmed at Britt Evangelical Free Church. He was an avid roller skater and often said that he went skating eight times a week. During high school, he was employed as a farm hand and aspired to be a farmer. He graduated from Britt High School class of 1952, and joined the United States Army shortly thereafter, serving honorably in Germany during the Korean Conflict as an Engineer Equipment Mechanic. Jim was awarded the National Defense Service Medal, Army of Occupation Medal (Germany), and the Sharpshooters Badge, attaining the rank of Corporal. After working with his brother Richard as a plasterer, he attended Mason City Junior College and then transferred to the University of Iowa, where he graduated with a degree in Electrical Engineering in 1963. Jim was united in marriage to Karen Lemke of Dows, Iowa, on February 2, 1963, at the Morgan United Methodist Church near Dows. He was employed by McDonnell Aircraft in St. Louis, working on the Gemini Spacecraft, then to TWA in Kansas City, Missouri. Jim then spent 27 years employed by Rockwell-Collins in Cedar Rapids, Iowa, as an Integrated Logistics Support Manager, retiring in 1996. Jim and Karen bought their first camper in 1969 and traveled to Wyoming quite often to see his brother David. In 2001, they joined NOMADS (NOMADS On a Mission Active in Divine Service), a United Methodist related mission outreach ministry, and began traveling in their RV to many states to work in the mission field. Jim could fix anything, so this was right up his alley. He loved woodworking and made many items for the home. A special memory Jim and Karen shared was a trip to New Zealand in 2001. Jim was a member of the Walker United Methodist Church where he served as the treasurer and ran the sound system, both for many years. Jim is survived and lovingly remembered by his wife, Karen Hansen of Walker; two children, Christopher Hansen and Terri Hansen both of Marion; two granddaughters, Cheyenne (Drake) Coonrod of Springville, Iowa, and Ciera Hansen of Marion; one great-grandson, Stetson Coonrod of Springville; three brothers, Duane (Marlene) Hansen of Plymouth, Minnesota, David Hansen of Jackson Hole, Wyoming, and Louis (Mary) Hansen of Oakley, Kansas; and numerous nephews and nieces. He was preceded in death by his parents; sister, Patricia Finer; and three brothers, Robert, Thomas, and Richard Hansen. The family wishes to extend a special thank you to the pastor and members of Walker United Methodist Church, members of the Walker Coffee Club, and NOMADS for their prayers and visits, and to St. Luke’s Hospice for their services. Memorial contributions in Jim’s memory may be made to either NOMADS, P.O. Box 9006, Hot Springs Village, Arkansas, 71910, or to Walker United Methodist Church, 101 Ely Street, Walker, Iowa, 52352.

The family of James "Jim" Allen Hansen created this Life Tributes page to make it easy to share your memories.

Send flowers to the Hansen family.