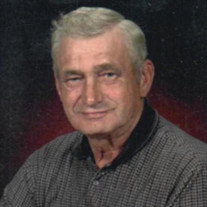 James Louis “Jim” Tesar, 76, of Springville, Iowa, passed away on Sunday, June 13, 2021, at the Dennis and Donna Oldorf Hospice House of Mercy in Hiawatha, Iowa. Family will greet friends from 4 to 7 p.m. on Thursday, June 17, 2021, at Murdoch Funeral Home & Cremation Service in Marion, Iowa. A Funeral Mass will be held at 10:30 a.m. on Friday, June 18, 2021, at St. Isidore Catholic Church in Springville, where an additional visitation will take place one hour prior to the Mass. The Reverend Andrew Awotwe-Mensah will officiate. Burial with military honors will follow at Springville Cemetery in Springville. Jim was born on November 3, 1944, in Iowa City, Iowa, to Louis and Gladys (Doskocil) Tesar. He spent his childhood in rural Springville and graduated from Springville High School. Jim enlisted in the United States Air Force in 1965 and served honorably through 1969. He was united in marriage to Delores “Dorie” Kray on August 20, 1966. After the Air Force, Jim and Dorie returned home to Iowa, and he entered the workforce at Allis Chalmers. Jim also worked at Harnischfeger and Evergreen Packaging through the years, and farmed until he retired in 2013. He was a member of the Knights of Columbus Council 5390. Jim loved to help everyone, from neighbors to friends and to family. He loved attending his grandkids’ events and spending time with family. Jim will be greatly missed by all who knew and loved him. Jim is survived and lovingly remembered by his wife of nearly 55 years, Dorie Tesar of Springville; three children, Terry (Cathy) Tesar of Urbandale, Iowa, Lori (Shawn) Moss of Mt. Vernon, Iowa, and Amy (Brad) Janssen of Marion; seven grandchildren, Sammy, Ben, and Abbie Moss, Caleb and Alyssa Janssen, and Lauren and Ellie Tesar; one brother, Donald (Gloria) Tesar; one sister, Marie Theisen; and a host of many extended family members including nieces, nephews, and cousins. He was preceded in death by his parents; and one brother, Richard Tesar. In lieu of flowers, memorials in Jim’s memory may be made to either Hall-Perrine Cancer Center in Cedar Rapids or Dennis and Donna Oldorf Hospice House of Mercy in Hiawatha.

The family of James "Jim" Louis Tesar created this Life Tributes page to make it easy to share your memories.

Send flowers to the Tesar family.