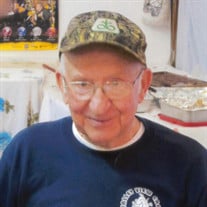 James “Jim” F. Wolmutt, 91, of Central City, Iowa, passed away Friday, January 15, 2021, at home in Central City. Family will greet friends from 4-7 p.m. Friday, January 22, 2021, at Murdoch Funeral Home & Cremation Service, Central City. The family will have a Celebration of Life from 2-6 p.m. Saturday, January 23, 2021, at the Central City American Legion. A private inurnment will be held at Mt. Clark Cemetery at a later date. Jim was born on May 3, 1929, in Waubeek, Iowa, the son of Roy J. and Goldie (Wilmont) Wolmutt. He graduated from Coggon High School. Jim married Shirley L. Walter on January 29, 1950, in Anamosa, Iowa. He worked at Wilson’s, for the railroad, and at the Joe Dolan Grocery Store. Jim and Shirley owned and operated Wolmutt General Store in Prairieburg from 1950-1994 up until his retirement. He was a Boy Scout leader. Jim was both a volunteer fireman and the City Clerk in Prairieburg for 40 years. He loved fishing and had the nickname “Jimmy Gill.” Jim also loved hunting and was an avid Cubs and Hawkeye fan. He is survived by his wife of 71 years, Shirley of Central City; son, Steven (Cindy) Wolmutt of Anamosa; daughter, Stacey Wolmutt of Central City; granddaughter, Nycole (Tom) Ganzhorn of Woodbine; step-grandson, Derek Summers of Monticello; seven great-grandchildren, Blake, Briana, Abby, Tessa, Beau, Jayde, and Rayanne; sister, Betty Dolan of Guttenberg; and many nieces, nephews and friends. Jim was preceded in death by his parents, grandson, Lance Wolmutt; and brother, Don Wolmutt. Special thanks to St. Luke’s Hospice staff, Dr. Fusselman and the chemo crew for their loving care. Memorials in Jim’s memory may be directed to Camp Courageous, 12007 190h Street, Monticello, Iowa 52310.

The family of James "Jim" F. Wolmutt created this Life Tributes page to make it easy to share your memories.

Send flowers to the Wolmutt family.