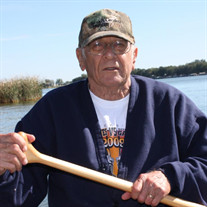 James Kratovil, 92, of Marion, Iowa, formerly of Twin Lakes, Iowa, passed away on Sunday, March 20, 2022, at Terrace Glen Village in Marion. A funeral service will be held at 1:30 p.m. on Friday, March 25, 2022, at Murdoch Funeral Home & Cremation Service in Marion. All guests are respectfully requested to wear a face mask and practice social distancing. A livestream of the funeral service may be accessed on the funeral home website tribute page for James, under “photos and videos or media,” starting at 1:30 p.m. on Friday. James was born on July 29, 1929, in Cicero, Illinois, the son of James and Mary (Wistain) Kratovil. He graduated from Morton High School in Cicero and went on to obtain his bachelor’s degree in teaching from Iowa State Teachers College (UNI). James obtained his master’s degree from the University of Northern Colorado in Greeley, Colorado. In 1952, James was united in marriage to the love of his life, Betty Dean Hobbs in Cedar Falls, Iowa. He began his teaching career in State Center, Iowa. In 1961, he took a position in Pontiac, Illinois, where he taught high school science and coached wrestling and football. In 1971, he stopped teaching and became owner/administrator of a care center in Fort Dodge, Iowa, retiring in 1996. James and his family lived on the lake at Twin Lakes, Iowa, where he enjoyed power boating, fishing, canoeing, and spending time on the lake. He was an active member of the Rockwell City Methodist Church, the Twin Lakes Association, and an enthusiastic member of the Rockwell City Lions Club, where he held offices and volunteered often. James was also a volunteer for the American Cancer Society and was a cancer survivor at the age of 90. James was a passionate Iowa Hawkeye fan. A season ticket holder with his son for 42 years, they enjoyed numerous Iowa Hawkeye football bowl games and away games. James enjoyed hunting upland game birds and fishing in Canada, Chesapeake Bay and at Twin Lakes. He was an avid and prolific reader of mysteries, sports, WWII, and airplane books. James was a nature lover and enjoyed bird watching. He and Betty did lots of traveling. He loved the New England states and visiting lighthouses. James was a proud father, grandfather, and great-grandfather and loved his family dearly. He will be greatly missed by all who knew and loved him. James is survived and lovingly remembered by his three children, Vicki Kratovil and Jill Facon both of Scottsdale, Arizona, and Kurt Kratovil (Patty) of Cedar Rapids, Iowa; four grandchildren, Aly Van Heukelom (Mark) of Marion, Emily De La Cruz (Stephan) of Cedar Rapids, Lydia Kratovil of Des Moines, and Andrew Facon (Lindsey) of Concord, California; four great-grandchildren, Luke and Mae Van Heukelom, and Jessa and Jack De La Cruz; and sister-in-law, Dixie Hindman (Jim) of Westminster, Maryland. He was preceded in death by his parents; wife, Betty Kratovil; and sister, Marian (Frank) Dressler.

The family of James Kratovil created this Life Tributes page to make it easy to share your memories.

Send flowers to the Kratovil family.