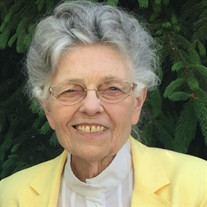 Janet Ann (Guyer) Portman, 79, of Cedar Rapids, Iowa, went to be with her Lord on Thursday, July 22, 2021, after a brief stay at Linn Manor Care Center in Marion. Family will greet friends and family from 4 to 7 p.m. on Tuesday, July 27, 2021, at Murdoch Funeral Home & Cremation Service in Marion, Iowa. A Funeral Service will be held at 10:30 a.m. on Wednesday, July 28, 2021, at the funeral home, conducted by William Lavery. Burial will follow at Oak Shade Cemetery in Marion. Janet was born on April 22, 1942, in Clayton County, Iowa, the daughter of Lawrence and Verda Mae (Kregel) Guyer. She was raised in rural Garnavillo, Iowa, with her three brothers and two sisters. At the age of ten, she trusted Christ as her Savior through the words of Isaiah 53:6. Janet was a graduate of Garnavillo High School. She worked for the Garnavillo Savings Bank as a bank teller until moving to Seattle, Washington, where she also worked as a bank teller. Janet met the love of her life, Joel Portman, while living in Seattle. They were married on June 12, 1967. To this union, two children were born, Julie and Jeff. In 1976, the family moved back to Garnavillo, where they lived until moving to Cedar Rapids in 2002, to be near family. Janet had many talents including tole painting many Bible texts, sewing mini quilts, needle point, and cross stitch. Many of the wonderful items she made were sold at The Side Door and The Buttery. Janet also enjoyed gardening and grew many beautiful flowers in her flower beds. She enjoyed fellowship with other Christians at the Marion Gospel Hall. Janet was a loving grandmother to her three granddaughters and will be greatly missed by all who knew and loved her. Janet is survived and lovingly remembered by her husband of 54 years, Joel Portman of Cedar Rapids; daughter, Julie (Joel) Hovey of Cedar Rapids; son, Jeff Portman of Cedar Rapids; two sisters, Lorna (Bob) Schwartz of Bentonville, Arkansas, and Eunice Sluiter of Allison, Iowa; two brothers, Roger (Sue) Guyer of Garnavillo, and Lynn (Lesa) Guyer of Guttenburg, Iowa; three granddaughters, Valeria, Juliana, and Gabriela; and many nieces and nephews. She was preceded in death by her parents; sister at infancy; and one brother, Wayne Guyer.

The family of Janet Ann (Guyer) Portman created this Life Tributes page to make it easy to share your memories.