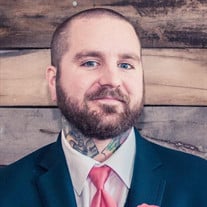 Jared J. Hebl, 33, of Erie, Illinois, died Monday, November 1, 2021, in his home. A Celebration of Life will be held at 1:30 p.m. on Saturday, April 30, 2022, at Murdoch-Linwood Funeral Home & Cremation Service in Cedar Rapids, Iowa. Jared James Hebl was born January 6, 1988, in Marshall, Minnesota, the first child of Robert and Laurie (Weber) Hebl. The family moved to Cedar Rapids, Iowa in 1992. Jared was a very happy little boy who would greet everyone he saw and frequently ask other kids if they wanted to be his friend. He was a daredevil who enjoyed skateboarding and was always up for an adventure. Jared served in the United States Army National Guard and was deployed in Operation Iraqi Freedom in 2010. Jared was awarded numerous commendations and service medals and was very proud to have served his country with honor. He was a very talented artist who produced exceptional tattoos, paintings and other creative works. His passions included collecting vintage comic books, working on his project car and racing it, fishing and disc golfing. He loved Christmas and spending time with his family, friends and his dogs, Chewy and Jack. Jared married the love of his life, Katie (McCauley), on November 18, 2018, in Wilton, Iowa. Together they shared many wonderful memories, many of which centered around their children Jaden and Bentley. Jared is survived by his wife, Katie; his parents, Laurie and Bob Hebl of Cedar Rapids, Iowa; stepsons, Jaden and Bentley Williams; his brother, Billy Hebl of Cedar Rapids; his grandmother, Vivian Mohawk of Alexandria, Minnesota; his beloved nephew, Liem Hebl; and many aunts, uncles and cousins.

The family of Jared J. Hebl created this Life Tributes page to make it easy to share your memories.