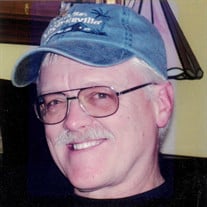 Jerry Allen Fruendt, 70, passed away on Tuesday, November 24, 2020, at the Dennis & Donna Oldorf Hospice House of Mercy in Hiawatha, Iowa. Per Jerry's wishes the body has been cremated. Services will be held on Tuesday, December 1, 2020, at 11:00 a.m. at Murdoch-Linwood Funeral Home & Cremation Service in Cedar Rapids, officiated by Pastor Joe Kane. All guests are respectfully requested to wear a mask and practice social distancing. A livestream of the funeral service may be accessed on the funeral home website tribute page for Jerry, under “photos and videos or media,” starting at 11:00 a.m. on Tuesday, December 1. Jerry was born on July 10, 1950, in Cedar Rapids to Walter and Vernice (Bortz) Fruendt. He attended Trinity Lutheran School, Roosevelt Junior High, and graduated from Jefferson High School in 1968. He trained to become an Automotive Technician and was ASE certified. He worked in this field for most of his adult life until he became employed at IWI Motor Parts as a courier, retiring from there in July 2019 due to his Stage 4 Lung Cancer diagnosis. On January 14, 1994, Jerry married Vickie "Susie" Warren who was by his side when death parted them. Jerry was a member of the Loyal Order of Moose Lodges. He enjoyed boating, downhill skiing, snowmobiling, motorhome tripping, NASCAR, casino visits, football and traveling to Estes Park whenever possible. He was also known to be able to build or fix anything and was nick named "McGuyver" for all his skills. He was a talented artist and his creations can be found gracing homes of friends and family. Survivors include his wife, Susie; brother, Eugene; uncle, Willard Bortz; cousins, Jo Ann and Gene Ketterling, David and Cynthia Fruendt, Marlene and Gary Read, Rodney and Gayle Bortz, Craig and Kristie Bortz and Nancy and Bob Welsh; and an extended family of friends. He was preceded in death by his parents; uncle and aunts, George and Loretta Bortz and Maxine Bortz; cousins, Audrey Fruendt Blunck and Gary Bortz. In lieu of flowers, memorials may be directed in memory of Jerry to Trinity Lutheran School, 1361 7th Avenue SW, Cedar Rapids, Iowa, 52404 or the Loyal Order of Moose Lodges, 1820 W Post Road SW, Cedar Rapids, Iowa, 52404.

Jerry Allen Fruendt, 70, passed away on Tuesday, November 24, 2020, at the Dennis & Donna Oldorf Hospice House of Mercy in Hiawatha, Iowa. Per Jerry's wishes the body has been cremated. Services will be held on Tuesday, December 1, 2020, at... View Obituary & Service Information

The family of Jerry Allen Fruendt created this Life Tributes page to make it easy to share your memories.

Send flowers to the Fruendt family.